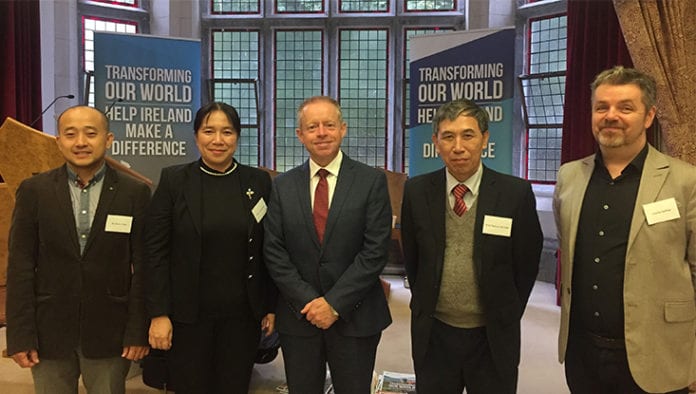 NUI Galway is partnering with Vietnam’s National University of Agriculture to create new food systems that can resist the damage being done to the world’s food supply by climate change.

The Ryan Institute at recently hosted a delegation from Vietnam to sign a Memorandum of Understanding between the two universities.

They will cooperate on a research and education programme involving collaborative projects and a student/teacher exchange between Galway and Vietnam.

Professor Charles Spillane, Director of the Ryan Institute, emphasised that climate change poses a real risk to our food supply.

“The agriculture and food systems of Ireland and Vietnam both face mounting challenges due to climate change and adverse weather events.

“On a global level, for the third year in a row the number of undernourished people has risen, increasing to nearly 821 million in 2017, from around 804 million in 2016.”

“Gains over recent decades in reducing levels of food insecurity are now being set back by adverse climate events in many regions of the world.”

Ireland’s heatwave and water shortages this summer caused great difficulty for farmers, particularly cattle farmers who had to dip into their fodder stocks in the middle of summer because there wasn’t enough grass.

Five students from NUIG’s Masters in Climate Change, Agriculture and Food Security have already been conducting research in Vietnam for the past two years.

The research they’ve been doing has been an important contribution towards creating more climate resilient agriculture and food systems across South East Asia.

Representatives from NUIG will be returning the favour with a visit to Vietnam this October.

A joint workshop between NUIG and VNUA on developing new food systems is planned for World Food Day on Tuesday, October 16 in Hanoi.

“The development of climate-resilient agriculture and food systems will require multi-disciplinary research to generate climate-smart innovations that will need to be deployed at scale in all countries,” said Professor Spillane.

The works already being done by NUIG students in Vietnam is being coordinated through the Irish embassy in Hanoi by Irish Aid.