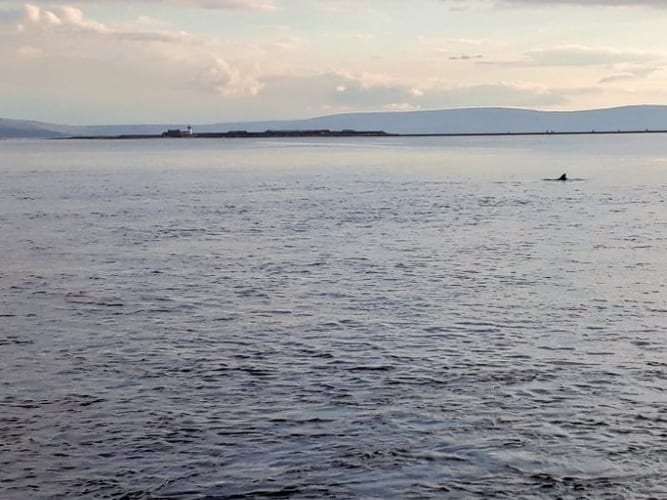 The bottlenose dolphin affectionately known locally as Nimmo has been spotted swimming in the waters around Galway city again.

The Irish Whale and Dolphin Group has said that Nimmo has been seen swimming near Nimmo’s pier at the docks for the first time this year.

Andrew Morgans reported a sighting to the IWDG of a solitary dolphin off Nimmo’s Pier at the docks at 8:45am on Monday, January 28.

“Given the location and circumstances, we are confident this is another sighting of the adult bottlenose dolphin known locally as“Nimmo”, and a welcome 1st record of this individual in 2019.” said Pádraig Whooley Sightings Officer of the IWDG.

This makes it five years running when Nimmo has been tracked in inner Galway Bay, particularly around the docks that give him his name.

Since first coming to the attention of the IWDG in 2015, the bottlenose dolphin has been spotted on 82 dates by eagled-eyed wave watchers.

A look at the dates when he/she has been first spotted over the past five years show that Nimmo is frequenting Galway earlier and earlier each year.

Not only is Nimmo arriving earlier each year, but he/she is sticking around for longer each year as well.

While this could just be a product of greater awareness and more people reporting sightings, the IWDG believes that it shows Galway Bay is becoming a more important feeding ground for the bottlenose dolphin over time.

“his is a wonderful opportunity for people in Galway to observe a wild dolphin so close to a city centre and often within clear view of the shoreline, where powerful optics may not even be necessary to see him/her,” Pádraig Whooley said.

“So it will be very interesting to see how Nimmo get’s on this year and how long he/she will remain in the area, if at all,” he added.

“Of course we’d ask people to report any sightings of him over the coming months on www.iwdg.ie for validation, and not to assume that because we may know he’s in the general area, that we are no longer interested in daily sightings, we are. It is your daily reports that help us build the bigger picture.”

Briain Kelly - January 24, 2022 0
Flood relief works are due to take place in the coming months in the east Galway village of Clonfert. Galway County Council has been allocated...