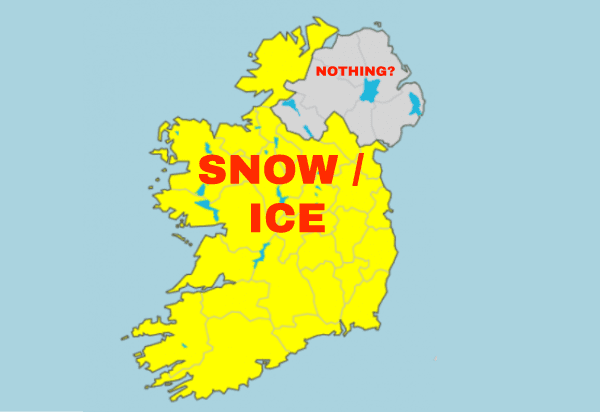 A no-deal Brexit is looking more likely than ever as the end of March finally comes into view.

And during the final countdown over the next two months, issues around the Irish border will no doubt be discussed and debated at length, over and over again.

The border question was almost ignored during the divisive referendum campaign in 2016, but it has proven to be a major toothache for Theresa May.

But ignoring the border has become commonplace for most on this island.

Despite the numerous problems that the border has created, most people who live in the counties either side of the invisible line have been ignoring it for many years.

Thousands of students and workers cross the border twice a day, and often the only clue that the jurisdiction has suddenly changed is that the speed signs look slightly different.

The landscape is the same and the houses look the same. And the miserable weather is definitely the same.

For Met Éireann though, the wind, rain, sleet and snow come to a sudden halt at the Irish border.

In its maps, the 26 counties are represented well. But the North is ignored – as those counties are currently the business of the UK Met Office.

The Met Office has different standards for determining if a weather event constitutes a warning; right now Donegal is under a weather warning for snow and ice, while no warning at all has been issued for Derry or Tyrone or the other four counties in the North.

The weather services’ different standards may be the primary stumbling blocks to removing the coarse partition in Met Éireann’s maps. 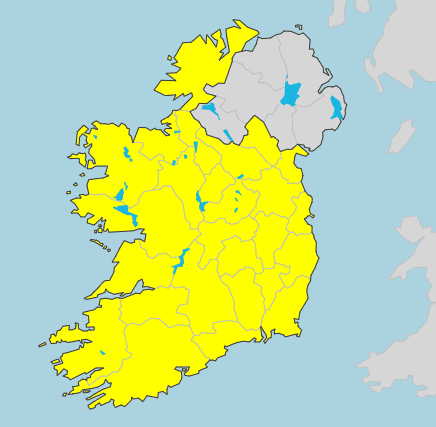 But the weather doesn’t stop at the border – hard, soft or otherwise – and many have pointed out how ridiculous this partition is.

The Head of News at Highland Radio Greg Hughes pointed out the ridiculous nature of this partition last year and previously tweeted that snow has no borders.

This partition is pointless. I’m sure Britain’s met office wouldn’t be too upset if it covered the other 6 counties https://t.co/jMyJyuLi5i

This digital partition is pathetic

This week, a Sinn Féin senator wrote to the Director of Met Éireann to ask for a meeting to discuss how they could represent weather events across the whole country.

Senator Niall Ó Donnghaile expressed his frustration at yet another map which amputated the north-east from the rest of Ireland, when weather warnings are supposed to be about alerting people to adverse weather situations.

“Weather knows no borders; neither should strategies that are meant to be about communicating the very real dangers posed by emergency weather situations,” said the Belfast-born senator.

He did acknowledge the reason that the North isn’t included in Met Éireann’s weather warnings though – that the UK’s Met Office has a different set of criteria for determining the severity of a weather event.

Senator O Donnghaile  added that recently we have rightly seen many weather forecasters and broadcasters north and south take a positive initiative and accurately reflect the warnings in each part of the country.

This, he said, improves information sharing and sensibly reflects the status of weather warnings across the island.

Sensible may be the key word here. The partition of Ireland on weather maps is anything but that.