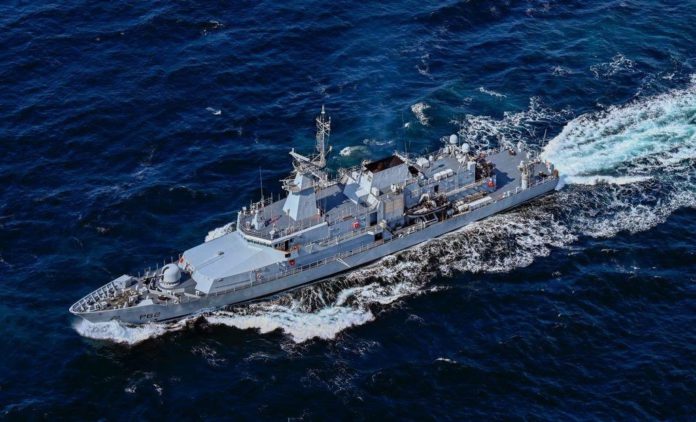 Correction: This article previously stated that tours would be available Saturday & Sunday, instead of only Saturday

The Irish Naval Service patrol ship the Lé James Joyce will be open to the public for tours in Galway City this weekend.

The ship will be docked in Galway City this Saturday, and will be open for the public to ‘Meet the Fleet’ from 11am to 3pm each day.

Before COVID-19 it was common for Ireland’s naval ships to welcome the public aboard for a tour when they were docked in harbours around the country.

That all changed with the COVID-19 pandemic, as it would not be possible to safely hold tours in confined spaces.

But with public health restrictions lifting, it seems that these popular tours are returning to public life as well. In past years, before the pandemic, thousands of people would sometimes come out to see what life looks like aboard a navy ship.

LÉ JAMES JOYCE will be in #Galway this Sat & will open to the public to “meet the fleet” as part of #IrishNavy75. The Ship will be open for guided tours & will answer general recruitment queries. Opening times are 1100-1500 🇮🇪#IrishNavy75#joinourteam #wildatlanticway #galway pic.twitter.com/PLaEC1JBhF

The LÉ Samuel Beckett is one of four new patrol vessels build for the Irish Naval Service since 2014, and the second in the series.

The primary duties of the these vessels is patrolling Irish waters for illegal fishing and smuggling, but they have also played a role in humanitarian operations in the Mediterranean.

Taoiseach Micheál Martin recently celebrated the 75th anniversary of the Naval Service’s foundation at a ceremony in Cork.

The Irish Naval Service has been dealing with a severe personnel crisis in recent years, as it has struggled to retain people.