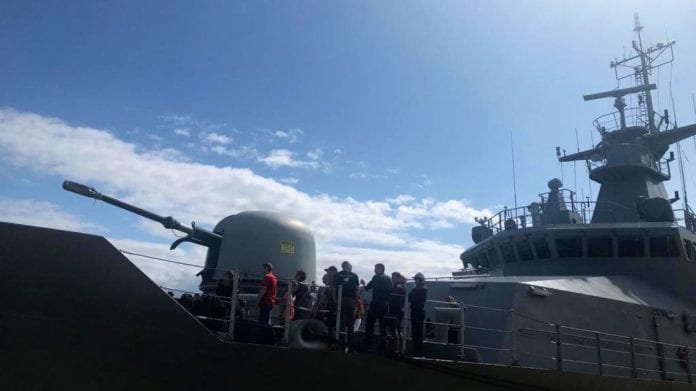 Just under 3,000 people came out to tour the Irish Navy patrol ship the LÉ Samuel Beckett while it was docked in Galway yesterday.

The navy had the Samuel Beckett docked in Galway on Sunday as part of a four week long Maritime Defence & Security Operations patrol of Irish waters.

Earlier this week it detained a Portuguese ship fishing illegally off the south coast.

The LÉ Samuel Beckett is one of four new patrol vessels build for the Irish Naval Service in the past five years.

It was the first completed in 2014, followed by the LÉ James Joyce in 2015, and the LÉ William Butler Yeats in 2016 and LÉ George Bernard Shaw last year.

The four are often called the playwright sisters due to their names, the first navy ships which weren’t named for mythic figures from Irish past.

Other than patrolling Irish waters for smugglers and illegal fishing, the naval service undertakes humanitarian missions in the Mediterranean sea, rescuing migrants.

While docked in Galway this weekend, members of the public could get a guided tour of the ship from crew members from 10am to midday and again from 2pm to 5pm.

A fantastic turn out today onboard LÉ #SamuelBeckett with just shy of 3,000 people coming onboard for a tour of the ship. #P61 is alongside @portofgalway this weekend as part of a routine 4 week long Maritime Defence & Security Operations (MDSO) patrol of Home Waters. 🇮🇪 pic.twitter.com/fuwO4b4WpL