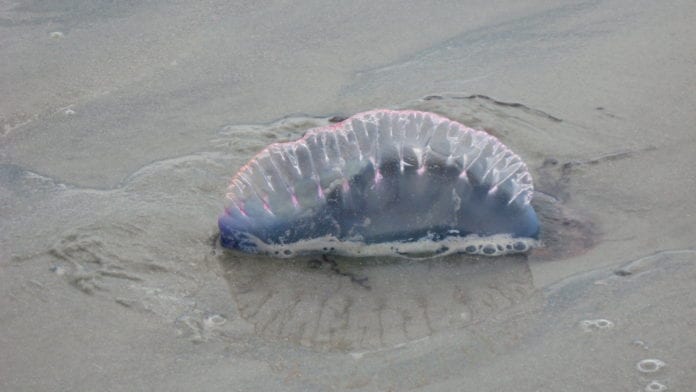 There have been more warnings about the presence of the dangerous Portuguese Man o’War out on in Connemara after fresh sightings.

Galway County Council issued a warning this afternoon about a Man o’War washed up on the beach at An Trá Mhór, An Cnoc at Indreabhan.

This is the second alert this week after the city council reported that one had washed ashore at Silverstrand beach yesterday.

Not a true jellyfish, the Man o’War is a collection of creatures called polyps that live together in a single fused organism.

It is recognisable by its sail atop its body and a distinct silver-blue colour from above and a reddish tinge below.

It’s tentacles can grow up to 30m long and carry a dangerous venom can cause swelling of the airways, fever, and breathing difficulties.

While not usually fatal, stings have been known to kill humans in the past so people are urged to keep away from any seen in the water or washed up on the beach.

It’s important to note that the tentacles can remain venomous for several days after the creature has died.

“A man-of-war sting is extremely painful and even dead ones washed up on shore can deliver a sting. The public are advised to exercise caution in the vicinity,” the county council said.

There were multiple sightings of Man o’Wars in the waters around Galway in October 2018 as well.

These visitors from the south were virtually unheard of in Irish waters until recent years but have exploded in numbers lately.

There were over 700 sightings in Irish waters in 2016 alone, the worst infestation in a century according to Irish Water Safety.

Some scientists have attributed the recent uptick to changing ocean currents and temperatures caused by climate change, but marine experts do not have a definitive answer.