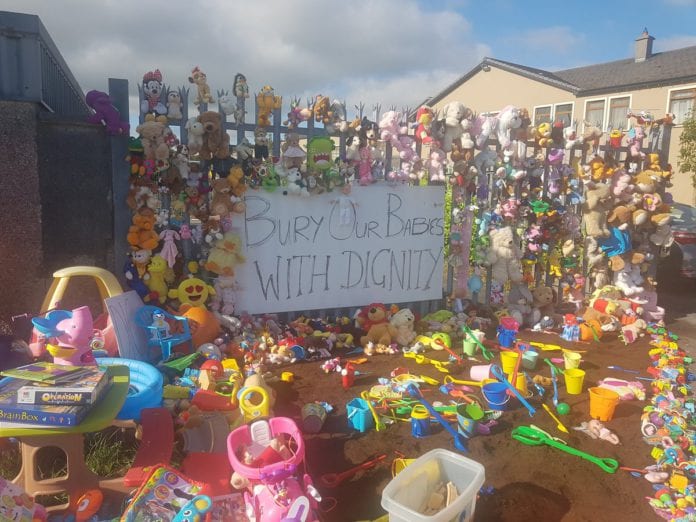 Children’s Minister Katherine Zappone will present a recommendation to the cabinet on how to handle remains at the former Tuam Mother and Baby Home by autumn.

On Monday evening Minister Zappone met with Tuam local and relatives of the Mother and Baby Home residents and the deceased children.

At it, she said it was her personal opinion that if it was “logistically possible” for the remains to be exhumed and properly interned then it should be done, though she added that “questions of scale” could complicate things.

While media were not allowed to attend the meeting, several people live tweeted from inside the meeting as the Minister took questions from people attending.

If the purpose of tonight’s meeting was to create a false equivalence between those who want exhumation and DNA analysis in Tuam and those who favour saying a Mass and covering up the #TuamBabies story, it backfired spectacularly on @KZapponeTD and/or her advisors.

@Donal_OKeefe said that of the people who spoke at the meeting, only two were opposed to performing a forensic excavation.

Outside the venue for the meeting, a memorial for the hundreds of children buried at the Bon Secours Mother and Baby Home was erected out of children’s toys.

A number of contributors at the meeting expressed frustration at how the entire process was being handled according to @IzzyKamikaze, who tweeted out people’s contributions as they spoke.

The question of what to do with the remains of nearly 800 children buried on the grounds of the former Mother and Baby Home has been going on for a long time.

Minister Zappone said that part of the reason for the delays was that she was is unsure if she has the authority to make a decision, but promised to bring forward legislation to enable an excavation if that is what is decided on.

But the Minister faced questions on whether it was up to her and the cabinet to make a decision at all, with several contributors saying it should be a matter for the gardaí and the county coroner.

However, some of the people who live next to the site reportedly said that they would prefer just for a memorial to be erected at the site.

At the close of the meeting Minister Zappone thanked everyone for their contributions and for allowing “minority views” to be heard.

That the vast majority of opinions at the meeting, including locals, seemed to back a full forensic excavation is at odds with what a survey conducted by Galway County Council reported recently.

It said that while survivors and relatives backed an excavation, local Tuam residents preferred to for the site t be memorialised but otherwise left undisturbed.

But reports of what was expressed at the meeting seem to suggest that Tuam residents back an excavation.

The horror of what happened at the former Bon Secours Mother and Baby Home in Tuam first came back into the public eye in 2015, when amateur local historian Catherine Corless revealed there are no burial records for 796 children believed to have to died at the home.

Initial forensic excavations carried out at the site found that there are large number of human remains buried there, with some buried in what has been described as a septic tank.

Many of the remains were buried without any kind of coffin, and there are no markers at the site to indicate the presence of a mass grave.

The most recent development in the story prior to this meeting was a public consultation carried out by Galway County Council at Minister Zappone’s instruction.

It found sharply divided opinions between Tuam residents, and survivors of the home, which this meeting now calls into question.

One question that has come up frequently when talking about the many children who passed through the Tuam Home is the illegal adoptions that are known to have taken place at religious institutions in Ireland.

One person at the meeting reportedly said they were told that their cousin had died at the Tuam Home at three months old, but cannot know that for sure.

Birth and death records are known to have been falsified to facilitate illegal adoptions to couples overseas and within Ireland.

Without a forensic analysis of the remains on site, and DNA comparisons to living relatives, it may not be possible to determine who truly lived and died there.

Michael Malone - October 4, 2022 0
Galway City Council has been awarded €300,000 for two cross-border collaborations that will directly support the arts and artists across the country. Atlantic Region of...