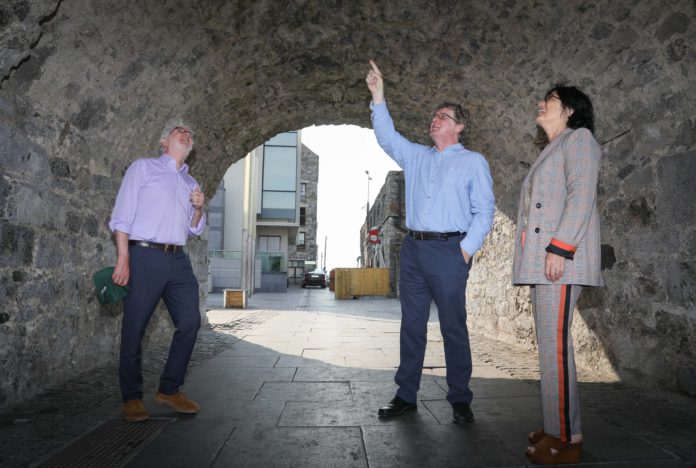 The Minister of State for Heritage and Electoral Reform has visited Galway City to see works being carried out at the Spanish Arch and Tirellan Castle.

Minister Malcolm Noonan met with the Mayor of Galway Cllr Colette Connolly this morning along with Galway City Council staff at the Spanish Arch, to get an overview of the ongoing works.

The Irish Walled Towns Network have been assisting Galway City Museum and Galway City Council to build a new medieval wing to the museum that will also allow access to the top of the Spanish Arch.

Over €79,000 in funding has been awarded towards the Spanish Arch under the Community Monuments Fund.

“The core objective of the Community Monuments Fund is to support the conservation, maintenance, protection and promotion of local monuments and historic sites and I am delighted to witness this work first-hand, here at this iconic site in Galway City,” said Minister Malcolm Noonan.

Acting Director of Services for Transportation, Planning & Physical Development for Galway City Council, Uinsinn Finn, added that they were delighted to welcome Minister Noonan today, and to give him an insight into the work being carried at the Spanish Arch and at Tirellan Castle.

“These sites hold an important place in the history of Galway City and it is crucial that they are preserved to the highest possible standards – this is helped greatly through the funding from the Community Monuments Fund,” said Uinsinn Finn.