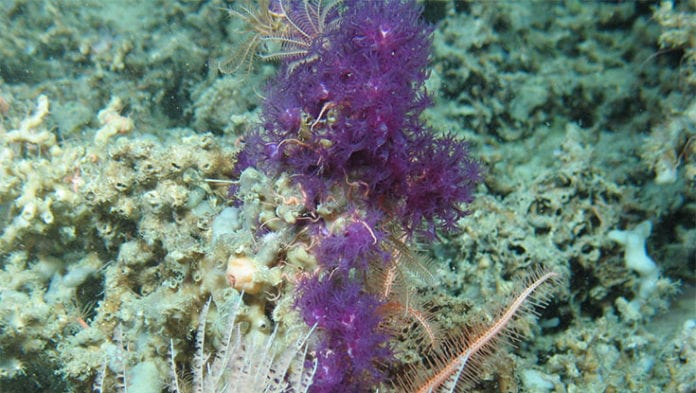 Marine Scientists from NUI Galway have recently returned from an expedition to source new pharmaceuticals from deep sea sponges on the very edge of Ireland’s continental shelf.

The expedition aboard the RV Celtic Explorer was backed by the Marine Institute based out of Oranmore.

Using the remote operated submersible, the ROV Holland I, marine researchers explored the ocean floor 100km off the coast of Bellmullet, Co. Mayo.

Marine life in that area like sea sponges and octocorals, which lack the stony exterior of reef-building corals, produce defensive chemicals that stop other sponges and corals growing on them.

Those chemicals, with their unique structure, can be valuable source of new medicinal drugs.

The team of scientists used the ROV Holland I to take samples of the sea life in the area for testing.

Back in the lab at NUIG, researchers tested the chemicals they extracted against a range of disease screens for various types of cancer, Huntington’s disease, Parkinson’s, epilepsy, and multiple pathogens like Enterobacter bacteria species.

Professor Louise Allcock from the Ryan Institute at NUIG, and Chief Scientist on the expedition, explained the importance of conserving these unique habitats,

“We don’t need much material to work out the structure of a new compound, which can then be synthesized in the laboratory,”

“But new diseases emerge every decade, and it’s really important to also conserve these unique habitats so that medicine can draw on them in the future. Our species distribution maps will help with that.”

For this project, the Ryan Institute worked closely with researchers from the University of South Florida and other collaborators around the world.

“And the deep-sea, with its specially adapted fauna, is likely to yield a range of chemistry not known from shallow waters.”

The area where they worked was chosen because previous surveys with ROV submersibles suggested that it was rich in sponge life.

On of the other principal experts who joined the expedition was Dr Joana Xavier, a marine researcher who has worked with CIIMAR Maine Research Centre in Portugal, the University of Bergen in Norway, and worked as Scientific Manager on the EU’s Horizon 2020 SponGES project.

She provided the team with her expertise in sponge taxonomy, the identification of species, gathered on many expeditions in the Atlantic.

Dr Xavier said the diversity of sponges found in Irish waters was breathtaking, with many untouched habitats.

“Unusually large individuals, likely to be hundreds of years old, were also observed, attesting to the pristine condition of some sites.”

“Other structural habitats such as cold-water coral reefs and gardens, also found during the cruise, help maintain the diversity in these areas.”