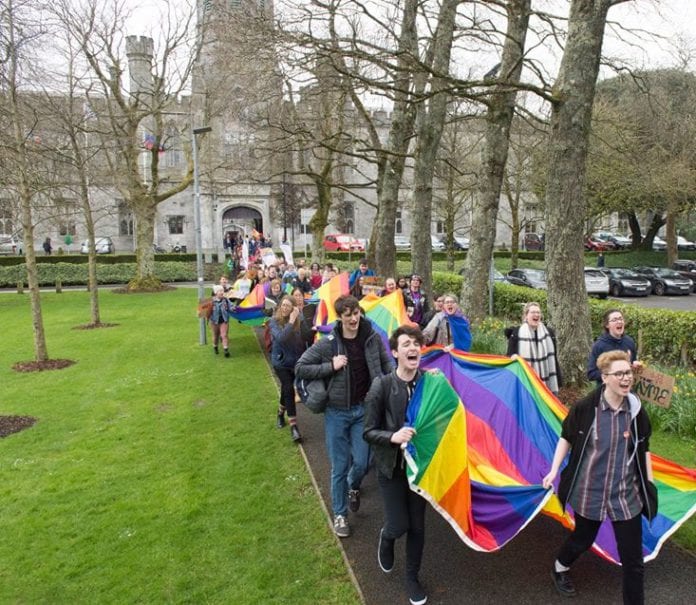 The first Pride March through NUI Galway campus has been a huge success.

Held by GigSoc, the LGBT+ student society, the march was part of a plethora of events for Rainbow Week.

Rainbow Week is an annual event organised by GigSoc and this year’s celebration of the LGBT+ community on campus included several new events, such as the launch of GigSoc’s first book which features contributions from NUI Galway students.

GigSoc has also recently launched the ‘T fund’, with support from the Office of the Vice-President for Equality, Diversity and Inclusion.

This project recognises the extra financial burden faced by transgender and non-binary students by providing funding to students of NUI Galway for financial costs related to social transition.

Maeve Arnup, Co-auditor of GigSoc and student in the College of Arts, said: “Rainbow week is the biggest week of the year for GiGSoc. This year we had two huge successes.

“The first being the launch of our first small publication ‘The Queer Book’ which is a collection of LGBTQIA+ writings, artwork and photography made by the community and for the community, with all proceeds from the sale of the book going to support Teach Solais, Galway’s LGBT+ Resource Centre.

“The second success was hosting the first Pride March to ever take place on a university campus in Ireland.”

Oissíne Moore, Co-auditor of GigSoc and student in the College of Arts added: “It’s amazing to see staff getting involved in the Pride March as it makes people feel that little bit safer knowing that staff are willing to march with us and support us.”

The LGBT+ Ally Programme at NUI Galway is a member-based initiative working towards increasing the knowledge, awareness, and support of LGBT+ colleagues and students.

Staff who sign up to be allies are provided with resources and visible symbols of their support for the LGBT+ community.

Dr Chris Noone, lecturer at the School of Psychology and Chair of the NUI Galway LGBT+ Staff Network, said: “The LGBT+ Ally Programme makes visible the support that exists at NUI Galway for students and staff who are members of the LGBT+ community.

“It shows that this is a welcoming place for people of all sexual and gender identities and that there is a community to connect with on our campus.”