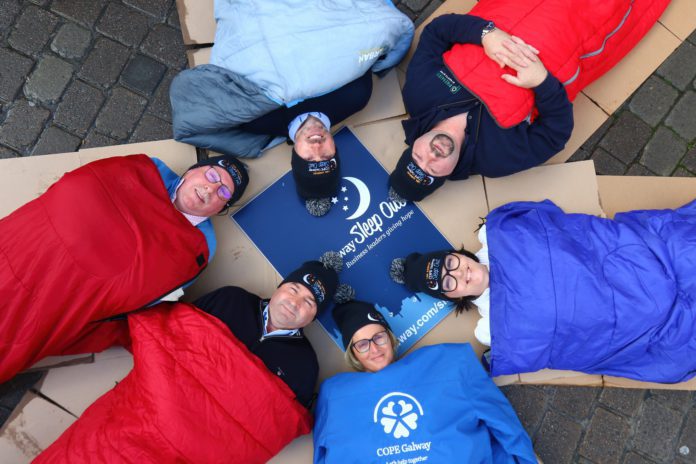 The annual COPE Galway Business Leaders’ Sleep Out will return to Shop Street this Friday to raise funds for their homelessness services.

In the lead up to Christmas, COPE Galway is supporting 453 men, women and children in Galway who are availing of Emergency and Transitional Accommodation via the charity’s Homeless Service.

This includes 86 families with 199 children and 134 single people. Some of these families are spending their second or third Christmas Eve waiting for Santa in emergency accommodation, many in a B&B room.

Martin O’Connor, COPE Galway’s Assistant CEO remarked, “Just this week we heard the announcement of a shocking and unprecedented number of people who don’t have a place to call home in Ireland.”

“Here in Galway, this winter is proving extremely challenging for so many across our community due to the cost-of-living crisis.”

“With asking rents for any available properties in Galway spiralling out of control, the challenge has never been greater for anyone without a home to find an affordable place to live.”

“Meanwhile, our services at COPE Galway have never been under such pressure,” she added.

Some 40 local business leaders will be spending the night in their sleeping bags on Shop Street this Friday, December 2, in what is the biggest fundraiser of the year for COPE.

Over the past 10 years since it was first launched, the Business Leaders Sleep Out has raised over €1.25 million for the charity.

One participant, Matt Carty of Zimmer Biomet noted, “There are a myriad of circumstances that can lead to anyone becoming homeless.”

“It can be very difficult to find a way out of homelessness – COPE Galway supports people, including families and children, through each of the stages.”

“Parents feel as if they are denying their children a normal childhood, though the homelessness is of no fault of theirs.”

“We support families with keeping as much a semblance of normality as possible while living in emergency accommodation.”

“Thanks to these funds raised, we’ve also been able to support families to move on from homelessness into a home of their own in a timely manner when the opportunity arises.”

The funds raised by the Sleep Out have helped with initiatives such as community based housing, and outreach support for the most vulnerable homeless, those sleeping rough on the streets.