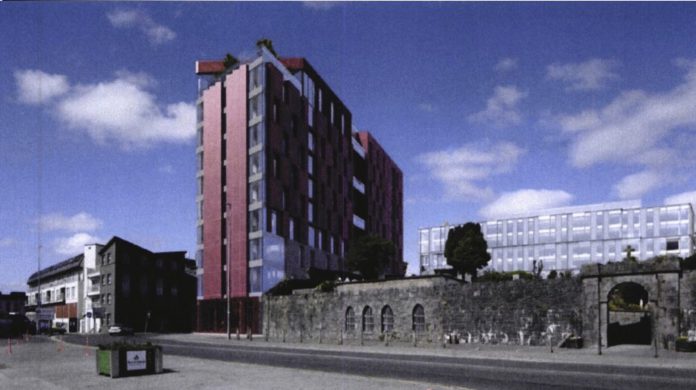 Galway City Council has refused planning permission for a proposed part three-storey, part ten-storey hotel on lands down by the docks.

Summix Development has been refused approval to build the hotel on lands at the corner of Lough Atalia road and Bothar na Long.

The city council rejected the proposal for the 174 bed hotel due to the “excessive density, scale and height on a very constrained site”, which would be contrary to proper planning and sustainable development.

The proposal, which was in excess of the plot ratios allowed in the city development plan, could not be granted an exemption as it would not make a “significant architectural contribution to the character of the city”.

The council also said that such as excessively large building would have a detrimental impact on the character and setting of the neighbouring Forthill Cemetery, which is a protected conservation area, and that its design fails to integrate with the character of the area.

The development would have involved the demolition of the unused Coal Yard industrial site next to Forthill Cemetery, and the construction of the new hotel on the narrow lot.

The original plans were for an 11 storey main hotel building, with a three storey element at the western end, containing a total of 186 guest bedrooms.

The council requested that the developer revisit the “overall scale, height, massing and intensity” of the property last November, but the removal of one floor was not deemed sufficient to meet that requirement.

The three storey element of the hotel would have been the western pavilion, incorporating a bar/restaurant over the three floors.

Other elements addressed in the revised plans submitted to the council, though they were ultimately rejected, included addressing concerns about access for deliveries and waste collection, by adding a drop off area at the east end of the site.