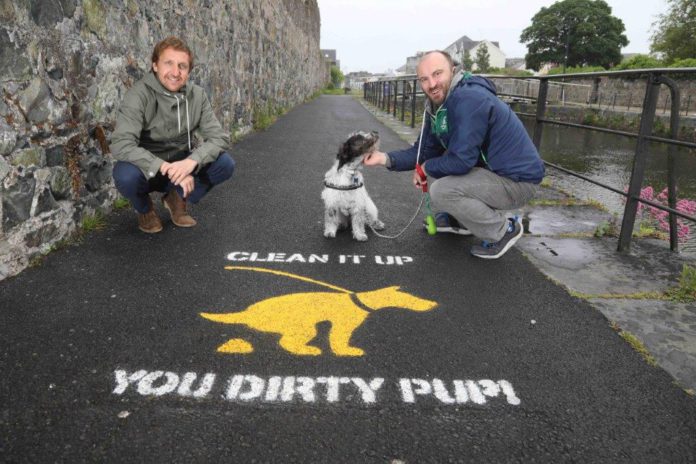 Galway City Council has launched a new dog fouling awareness initiative in the city aimed at irresponsible dog owners who do not clean up after their dogs.

Council staff are stencilling a ‘Clean it up you dirty pup!’ message on footpaths in over 70 locations around the city as one of the first measures in the campaign.

Local volunteers from Residents Associations and Tidy Towns groups will also use a spray to highlight individual dog foul with bright yellow spray paint which will wash away after a few weeks.

Galway City Council will also trial the overtime of Community Wardens in the mornings, evenings and weekends for problem areas identified in the City.

Speaking about the new initiative, Tiarnan McCusker, Environmental Awareness Officer with Galway City Council said that getting outdoors with their dogs has been a great way for people to keep active in the past year.

“Unfortunately, this has led to an increase in dog fouling on the city’s streets, which can ruin the outdoor experience for everyone,” said Tiarnan McCusker.

“We hope dog owners can get behind the campaign and take pride in cleaning up after their dog.

“It will be a multi-pronged campaign, with both awareness raising of the issue through the media and social media, as well as a number of collaborative Galway City Council and community group actions on the ground to reduce the amount of dog fouling in the city.”

Dog owners can send in photos of responsible dog ownership to environment@galwaycity.ie with a chance of winning a €20 One4all voucher each month for the rest of 2021.

Under the Litter pollution ACT 1997, dog owners are legally obliged to clean up after their pets, if they go to the toilet in public places. Those who do not clean up after their dog are liable to receive a €150 on the spot fine or Pay €3,000 in court on prosecution for non-payment.