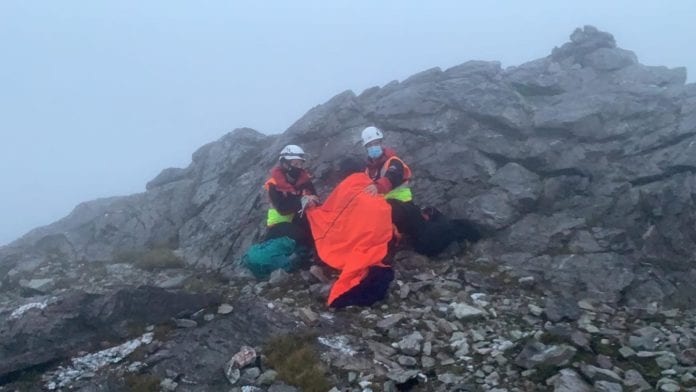 A hiker was rescued from the Twelve Bens mountains in Connemara on Saturday night after a hours long effort by Galway Mountain Rescue during a weather warning.

The hill walker got into trouble on the Glencoaghan Horseshoe in the Twelve Bens range shortly before 4pm on Saturday afternoon, with terrible wind and poor visibility.

A Status Yellow wind warning was in force in Galway from 4pm on Saturday until 1am on Sunday morning, terrible conditions to be out walking on a mountain.

Galway Mountain Rescue were called out by the Gardaí, and spent hours reaching, and rescuing the stranded hiker.

Visibility at the higher elevations along the Glencoaghan Horseshoe was down to just 1 – 2 metres during this time.

The mountain rescue team reached the casualty around 8pm, and treated them for exposure to adverse weather conditions, before evacuating them off the mountain.

“Our volunteers have successfully evacuated the casualty off the hill,” GMR shared in an update on the facebook page shortly before 11pm on Saturday night.

“Despite having to contend with horrendous weather conditions over steep, exposed and rugged upland terrain tonight, everyone has returned safe and well. Fantastic result all round.”

“We would like to wish the casualty a safe journey home and thank our colleagues in An Garda Síochána for their assistance in this emergency search and rescue operation.”

“Also, big thanks to the local land owners for granting us access to their land tonight.”

Galway Mountain Rescue said this incident highlights the serious risks involved in going out into “remote upland terrain” during a weather warning.

“Given the highly changeable nature of our weather systems in the West of Ireland, particularly in the mountains, we would strongly recommend due consideration always be given to weather forecasts and routes planning prior to venturing onto the hill.”