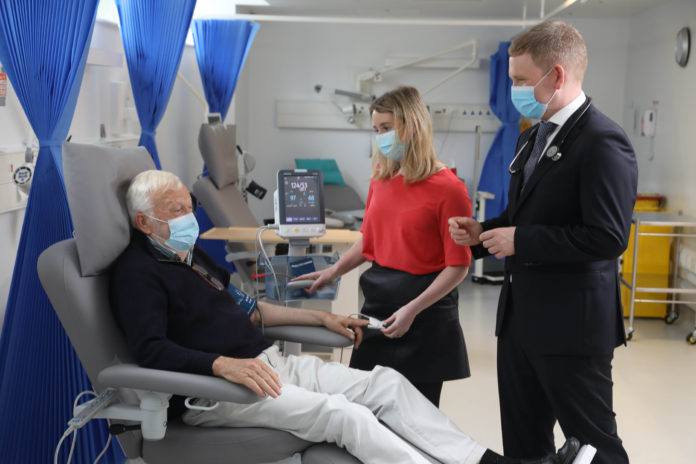 Some 42% of patients attending a dedicated diabetes clinic have signs of established chronic kidney disease, the first detailed research of its kind in Ireland has revealed.

The study was carried out by academics at NUI Galway and clinicians at University Hospital Galway Diabetes Centre and involved more than 4,500 patients in the west of Ireland.

The findings suggest that despite careful medical management, a relatively high proportion of people with diabetes in Ireland are developing chronic kidney disease over time and are at risk of kidney failure and other complications of poor kidney function.

Diabetes is now the number one cause of chronic kidney disease and kidney failure worldwide.

At least one in 15 people in Ireland has diabetes, three quarters of whom are adults with type 2 diabetes.

Professor Matthew Griffin, consultant nephrologist at Galway University Hospitals and researcher in NUI Galway’s College of Medicine, Nursing and Health Sciences, said: “When evidence of chronic kidney disease due to diabetes appears, it usually indicates damage to the kidneys that cannot be reversed and may well worsen over time.”

The research, published in the journal BMJ Open Diabetes Research and Care, is the first comprehensive analysis of the overall burden of chronic kidney disease among people with diabetes in Ireland.

It found that 42% of patients at the clinic had evidence of abnormal kidney function, based on the results of commonly-performed blood and urine tests.

The kidney function of more than one quarter of all the patients and nearly one third of those with type 2 diabetes was declining at a faster rate than expected.

The research team said the findings of the prevalence of chronic kidney disease were particularly concerning because the number of people affected by type 2 diabetes is increasing steadily around the world. In the next 20 years it is expected to reach close to 700 million people.

Dr Tomás Griffin, consultant endocrinologist specialising in diabetes care at Galway University Hospitals, Honorary Senior Lecturer at NUI Galway and lead researcher on the study, said: “The findings tell us that adults living with diabetes in Ireland have rates of chronic kidney disease and rapid decline in kidney function that are comparable to, or greater than, populations which have been studied in the UK, other European countries, the US and Asia.

“The study provides important information for people with diabetes because new treatments and interventions are emerging which may offer better protection of kidney function over time when introduced in the early stages of chronic kidney disease.

“Worryingly, many people with diabetes are unaware of the earliest evidence of diabetic kidney disease that can be identified in their blood and urine tests. This research shines a light on the need for greater awareness of these tests during the early stages of diabetes management and more collaborative care by diabetes and kidney specialists.”

Professor Francis Finucane, co-author on the study and consultant endocrinologist specialising in the management of obesity and diabetes at Galway University Hospitals, said: “The more we can do to prevent type 2 diabetes and the factors that contribute to it by encouraging healthier diet and physical activity habits, the better our chances of reducing the burden of kidney disease.”

No timeline yet for delivery of new UHG emergency department

UHG the most overcrowded hospital in Ireland today

Briain Kelly - July 24, 2021 0
A Galway man pleaded guilty to dangerous driving causing the death of a passenger in the allegedly stolen car he was driving last August.Richard...