With summer now seriously threatening to show its face, and maybe even possibly a sunny one if things continue to pick up over June, people are starting to look at getting out of the house once again.

International travel is still somewhat murky, but there are plenty of stunning locations that don’t require you to leave the country, some of those staycations that were the constant talk of summer last year. For people living in Galway, you don’t even have to travel overnight if you don’t want to.

Aran Island Ferries, which has been sailing a passenger service to and from the Aran Islands from the port at Ros a Mhíl for almost 40 years, has launched a new tourist route from Galway City.

This service takes passengers first on a cruise across Galway Bay, out to Inis Mór, where they can spend the afternoon taking in the island and its attractions, or even stay overnight. From there the ferry heads to Cliffs of Moher, where you are treated to a stunning view of the cliffs towering above you from the sea. 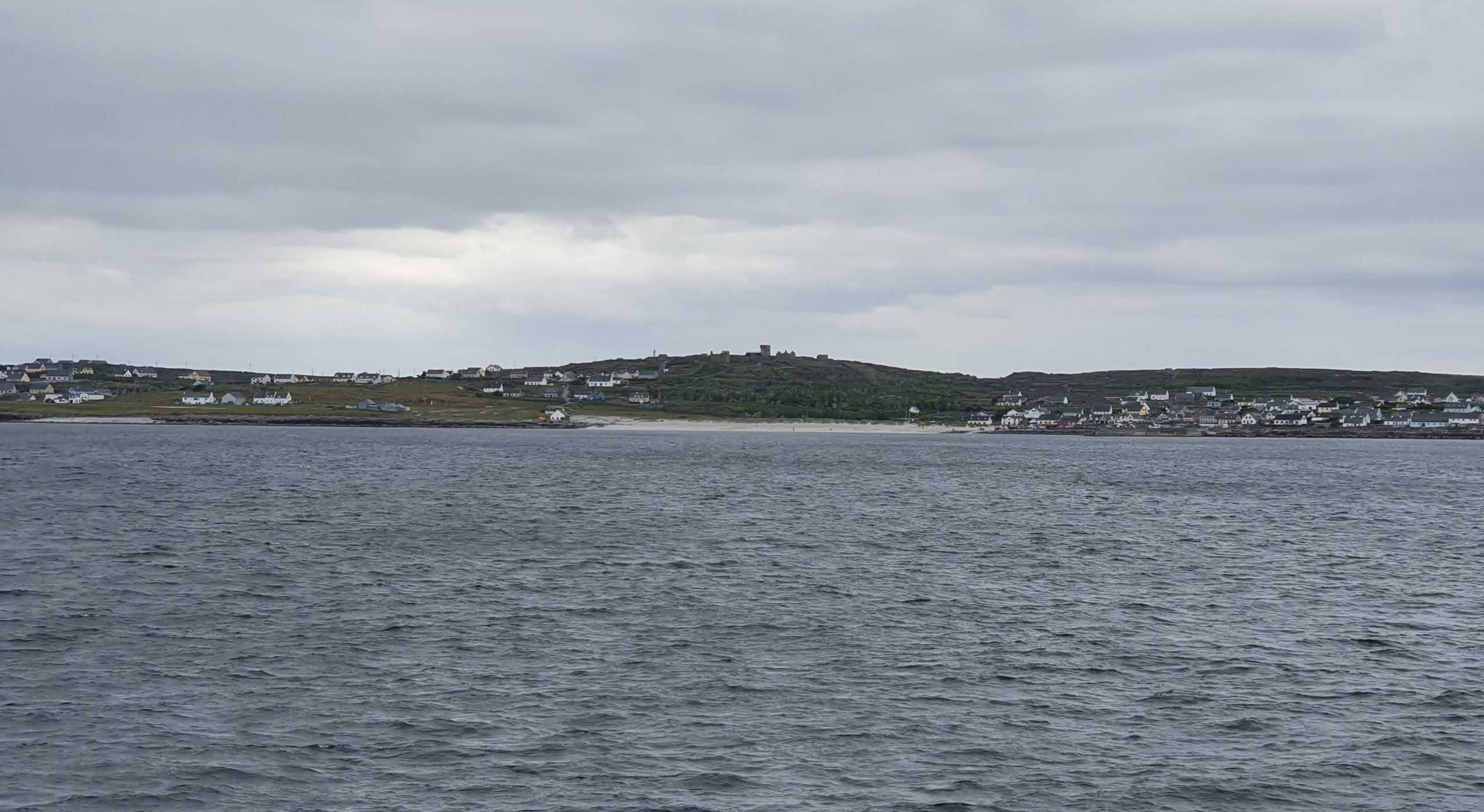 A confession I have to make before going any further. Despite having lived in Galway for the best part of ten years now, I had never been to the Aran Islands. It had always been something I’d got in my head that I’d do some weekend.

This was especially true every time I’d hear friends from outside of Ireland talking about hitting all the most loved spots along the Wild Atlantic Way. But the timing never seemed quite right. By which I mean there are plants that have a greater range of movement than myself on many a Saturday.

Long walks on the Prom, and up the river by NUIG, have been a lifeline for sanity in the past year, but this felt like clearing out months of the same apartment air, breathed in day after day.

Saoirse na Farraige is the largest ferry in the fleet of Aran Island Ferries, capable of holding 400 people making a trip out to the Aran Islands and the Cliffs of Moher.

The top deck of the ferry is the perfect place to watch the Connemara coastline slide by as you cruise across the bay, with wind in your face and a light spray from the sea when you stand by the sides of the boat.

Summer really is the perfect time to take this tour, best suited to basking in the sun, hopefully and enjoying the view. We were fortunate enough to enjoy clear skies and a calm sea, all of which made the hour and half trip out to the islands just slide by. 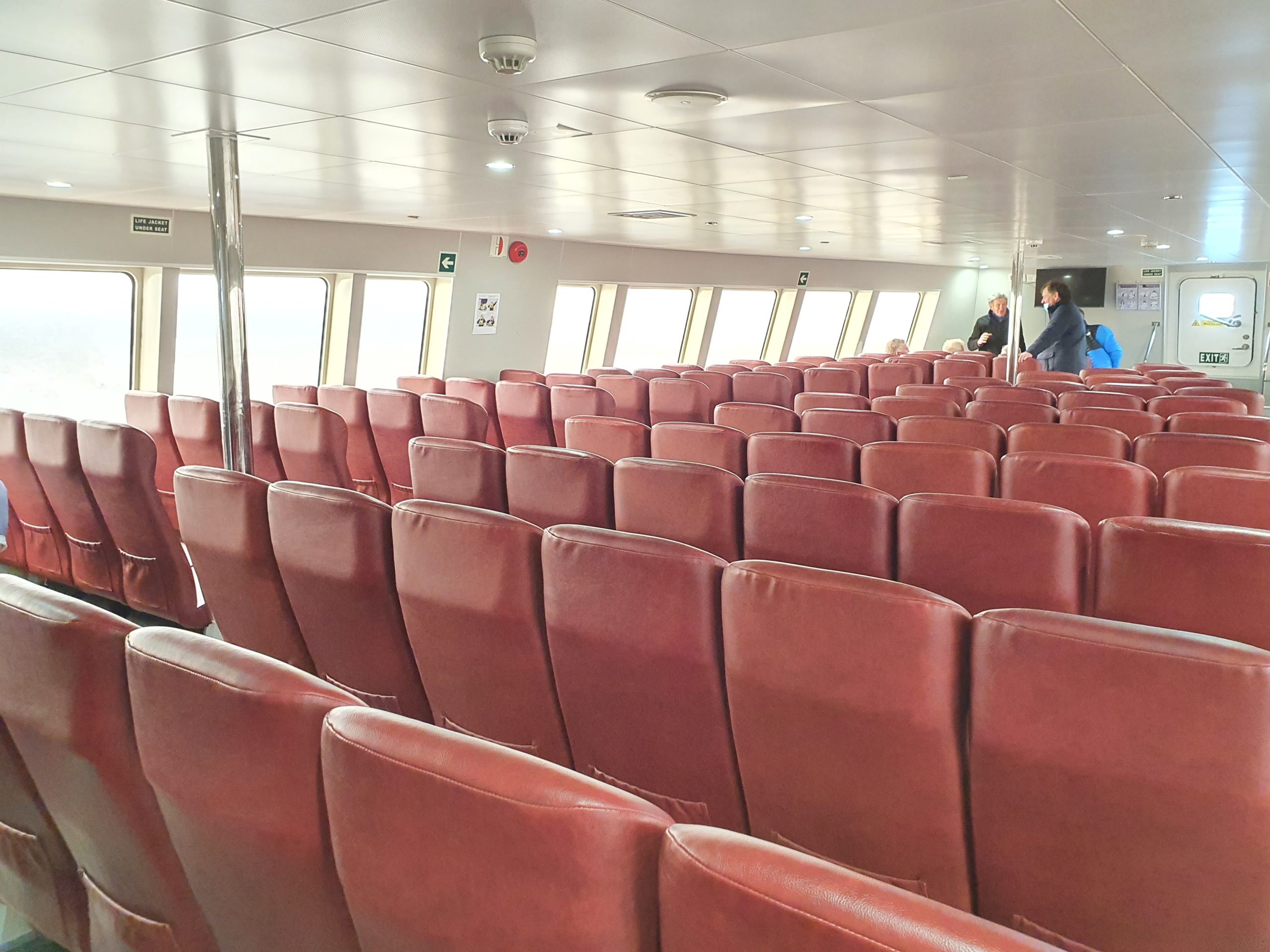 For people who get a bit seasick, or don’t enjoy the wind and spray from the water, the larger passenger area of the ferry below decks has clearly been designed with comfort in mind. Rows of well cushioned seats offer a chance to ride in comfort for people whose main concern is being delivered to Inis Mór in comfort.

Captain Shane McCole said that he was very pleased with the maiden voyage of Saoirse na Farraige. The weather stayed clear for most of the trip, always a worry for anything on the Atlantic Coast, even before getting on a boat. Meaning guests were treated to a perfect view of the Cliffs of Moher

He is clearly enthused about the design of Saoirse na Farraige, saying that its higher freeboard and more seating design make it extremely comfortable for passengers. “Overall, it’s a nice vessel, very capable, very comfortable.”

And despite his years of experience making runs for Aran Island Ferries, the trip hasn’t gotten old for him.

“You’re seeing all of Galway Bay aren’t you,” Shane says by way of explanation with a laugh, heading out past Spiddal and Inverin. “The next thing you arrive at the Aran Islands, which are beautiful in their own right. Then you get the bonus of heading down the cliffs and seeing the scenery there.”

On the way back up to Galway Bay there is the scenery of the Burren on your starboard side, he adds, along with the possibility of glimpsing dolphins in the evening time.

And it has always managed to stay a fresh experience for him, even years into the job. “Every day at sea you have different weather, different sky, different sea colour. It all adds to a different experience every time you’re out.”

The bulk of the tour took place on Inis Mór itself, where travellers get to enjoy around five hours of time to explore the island, enjoy a pint and some food in the sun while taking in some truly unique scenery.

While there were, and are, minibuses available to take visitors to Inis Mór to and from the most well known locations, the best way to appreciate the island is via bicycle, easily achieved from the multiple bike rental spots right at the end of the pier when you step off the boat.

I can say in hindsight that cycling across Inis Mór, from Kilronan to Dun Aengus, and back, was one of the most enjoyable experiences I’ve had in years. Of course, at the time my legs were happy to scream in protest that I hadn’t been on a bike in years, and that Inis Mór is a very hilly island.

But we shouldn’t let my poor life choices get in the way of an undeniable truth. And occasionally stopping to check if my legs had fallen off came with picture perfect chances to take in the landscape of Inis Mór.

The rocky, exposed landscape of the largest of the Aran Islands has a strange feel to it. Despite its starkness, it doesn’t feel cold or unwelcoming at all. When you look out across stretches of broken rock and fields, with clusters of homes and businesses clearly visible from far afield, it feels intensely connected, a close knit community.

And of course, the views are absolutely stunning, walking from the base of Dun Aengus up to the old fort itself is well worth the trek, however you choose to get there. The old hillfort sits atop a awe inspiring set of cliffs itself, and whatever role it played in millennia past, now it almost seems designed for visitors.

The walls enclose an area that opens onto the Atlantic, stretching out wide and blue in front of you, with nothing to impede the view, and nothing else out there until you hit Canada.

Close to the finish line of the bicycle ride back to Kilronan towards the end of our time on the island, I was happy to stop at Joe Watty’s Bar and restaurant to grab a pint of Guinness to enjoy outdoors and few chips. An excellent way to recharge after an afternoon well spent.

Aine McLoughlin of Aran Island Ferries said that they aim to offer a new way to explore the Cliffs of Moher from the sea, and the many attractions that are available on Inis Mór, such as bike rides, minibus tours, and even off-road trips that explore those hard to reach places off the beaten track.

“The purpose is not just to celebrate Aran Island Ferries new product, but also the amazon products and services on Inis Mór.”

There’s a pent up demand for people to get out of Galway, even just for the day, she agreed. Aine also felt that there are still a lot of people who feel nostalgia for the old Naomh Éanna line, which operated between Galway City and the Aran Islands until 1988.

“Anything I post about this new route on social media, I get comments that are filled with warmth and nostalgia about the Naomh Éanna last sailing.”

She also feels that in the past year and half, as we have been stuck at home for the most part, people have come to appreciate the simpler things they can discover close to home, rather than holidaying abroad.

“From a travel standpoint, you see so many locals that are now exploring attractions that are down the road, around the corner that, potentially they never would have been interested in, because they had the options of travelling overseas.”

On top of the day tour, there is also an overnight version of the tour available, where you board the ferry as normal on the morning of day one, and get to spend the day and night on Inis Mór, a perfect option for people who aren’t out on the west coast often, and want to take in as much as possible while they’re here.

The last destination of the trip is the Cliffs of Moher themselves, and while people may be familiar with seeing them from the top, getting to view them from the water is something else altogether.

At first not appearing much more impressive than a lot of the west coast, which tends to loom, they grow ever taller as the boat approaches, until they’re right in front of you, clawing at the sky.

It’s a view I’d highly recommend seeing in person, and manages to stand as a singular counterpoint to any impression that Ireland’s landscape is solely composed of gently hills and fields.

Best Christmas markets in the world ranked with Galway in top 10! 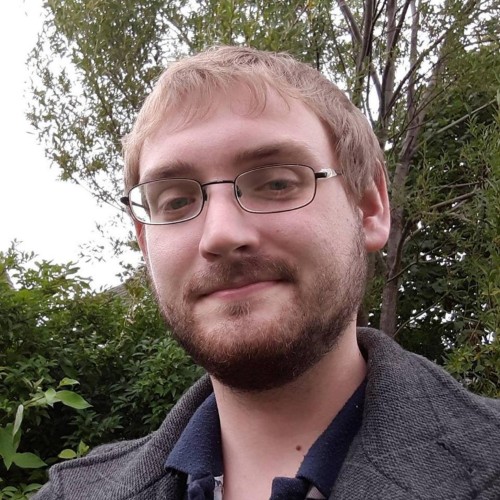