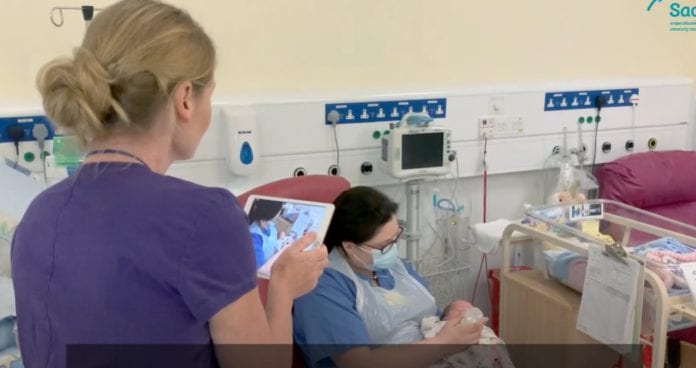 The Neonatal ICU at University Hospital Galway is using technology to help new parents be close to their newborns, even when it’s not possible to be there in person.

The NICU has introduced a new service called vCreate to take video clips of babies when they are being bathed, fed, or having time with mum during visits, and then share those videos with parents.

“It helps particularly when they’re so far away from their babies in this difficult climate,” said Dr Ethal Ryan, Neonatal Consultant at UHG.

“It’s one thing getting information when you ring the hospital and you hear your baby is doing very well, but it’s completely different when you get to capture the video-clip and the parents get to actually see it first hand.”

The Neonatal ICU is special unit for infants who may be born premature, with jaundice or infection, or are waiting for surgery due to other complications.

These are carefully controlled environments where very small babies tend to be kept in incubators whilst receiving specialist care.

When parents come to the neonatal intensive care unit at UHG they are invited to join the vCreate app that alerts them whenever their is a new video or pic of their child to view.

“This builds up a video or a diary over time of the baby’s stay at the neonatal unit,” said Aine Binchy, Advanced Nurse Practitioner, “which the parents get to keep as a long term memento.”

The response from parents to the new programme has been “overwhelming” Aíne said, adding that it provides unique “reassurance” of the standard of care their baby is receiving at the Neonatal ICU.

“If I’m not able to come down in person, for whatever reason, it means that I can actually see her,” said Karen, whose daughter Ríona was transferred to UHG after being born at 28 weeks in Sligo University Hospital.

She and her partner Michael live in Sligo, and have to commute down to Galway when they want to see their daughter.

It’s been especially hard for Michael, she adds, as its been more than a month since he’s gotten to see his girl in person.

The vCreate app has enabled him to “be a part of seeing her grow every day”, something that she appreciates as well.

“It’s all good and well phoning the ward up and saying ‘how is she?’ and the girls saying ‘yeah, yeah, she’s great'”.