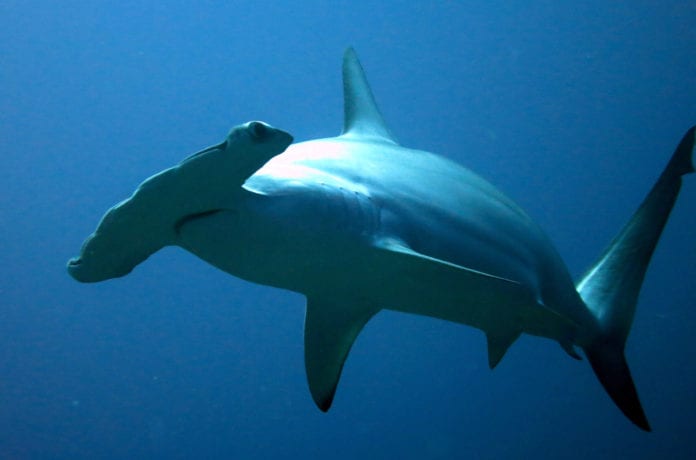 A hammerhead shark has been spotted in Irish waters for the first ever time by a research team from Galway’s Marine Institute.

A survey group aboard the Marine Institute’s RV Celtic Explorer spotted a smooth hammerhead shark in the Celtic Sea, on the edge of the continental shelf, south-west of Ireland, the first time the species has ever been seen in Irish waters. 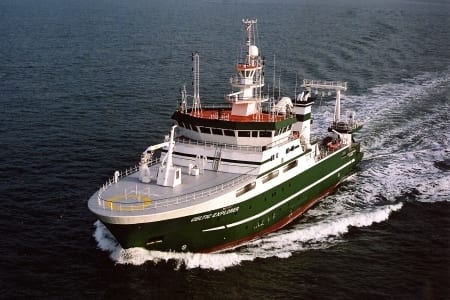 John Power said, “While scanning the ocean surface, we sighted a dorsal fin unlike anything we had encountered before.”

“It was quite different to the fins seen on basking sharks and blue sharks. After consulting available ID keys, we agreed that the shark must be a smooth hammerhead.”

The large, tall and slender dorsal fin of the smooth hammerhead shark distinguishes it from other sharks, as well as, you know, the hammer head.

The smooth hammerhead also has a single-notch in the centre of its rounded head and are up to four metres in length.

The species gives birth to live young and the pups are usually found in the shallow sandy waters near Florida, the Caribbean and West Africa. However, the species has been recorded as far north as England and Wales.

Some marine experts have said that rising water temperatures may be responsible for bringing this new visitor towards Ireland.

Dr Paul Connolly, Director of Fisheries and Ecosystems Services at the Marine Institute said that there are 35 species of shark known to inhabit Irish waters.

“This sighting of a new shark species, shows the importance of our fishery surveys to monitor our marine environment, and to observe changes in our oceans and marine ecosystems.”

“Observing and understanding a changing ocean, is essential for protecting and managing our marine ecosystems for the future,” Dr Connolly said.

Thirty-five species of sharks have been recorded in Irish waters, including the blue shark, porbeagle shark, lesser spotted dogfish and the second-largest species in the world, the basking shark.

Last year an amazing shark nursery was discovered on the ocean floor 200km off the coast from Galway by the Marine Institute’s remote operated submersible ROV Halland 1.