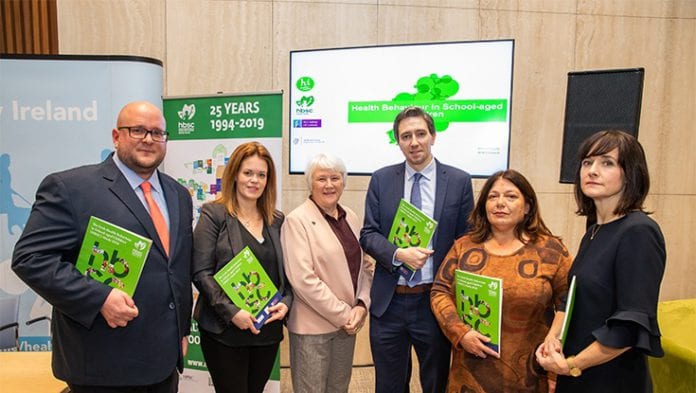 The number of kids who reported being bullied has gone up, while overall happiness and life satisfaction has declined among children.

There is a 4% drop in life satisfaction and happiness to 43% from 47% in 2014. Girls are significantly less likely to report being happy than boys.

Those are just some of the facts relayed in the Health Behaviours in School-aged Children (HBSC) 2018 Study which was launched last week by Health Minister Simon Harris and Minister for Health Promotion, Catherine Byrne.

The Irish part of this international study was carried out by NUI Galway’s Health Promotion Research Centre and led by Professor Saoirse Nic Gabhainn.

Minister Byrne said that the bullying and life satisfaction figures are concerning, and that she was struck by the fact that more kids are bullied in real life than online.

“This underscores for me the very important role that adults in schools and our communities play in promoting healthy and respectful environments for young people, and in supporting participation in activities that protect mental wellbeing such as sport, arts and culture.”

There were also more positive findings, such as the fact that the number of kids who report never having had a drink of alcohol has gone up by 6% since 2014, now standing at 64%.

Of those children who reported ever having had alcohol, 54% received alcohol from a parent, guardian, sibling or reported taking alcohol from the family home, with a further 30% sourcing it from friends.

“Given the damaging effect that alcohol can have on the growing brain, the reduction in children trying alcohol and children reporting having been drunk is welcome,” Simon Harris said.

“However, I am struck by the finding that by far the most common source of alcohol for children is within their family home.”

“This is an issue that all of us, as parents and adults in the lives of young people, need to reflect on,” the Health Minister added.

“We need to change our culture around alcohol in Ireland, if we are to reduce the corrosive effects alcohol has on so many young lives.”

Traditional smoking among young people is also the decline, with the number of children between the ages of 10 and 17 who admit to having tried smoking dropping from 16% in 2014, down to 11% in this latest report.

However the study also found that 22% of respondents said that they had smoked an e-cigarette.

Minister Harris acknowledged that this is a “cause for concern” and said that he will be introducing legislation this year to ban the sale of e-cigarettes to children under 18.

Professor Saoirse Nic Gabhainn, Principal Investigator of the HBSC Ireland research team at NUIG said that while this report shows continued improvement in some areas of child health and well being, it also highlights areas where more work is needed.

Other information contained in the report includes a 6% drop in the consumption of sweets and sugar-sweetened drinks.

The number of people between the ages of 15 and 17 having sex has declined, but contraceptive use among those that do has also declined significantly.