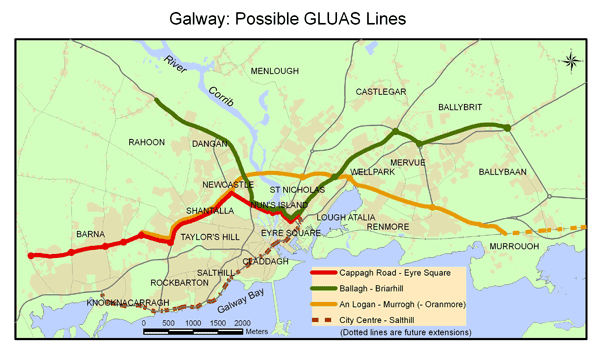 The biggest talking point in Galway right now has to be the prospect of a Gluas. Gluas, for anyone who has somehow avoided the moment’s water-cooler topic, is the name given to a proposed light rail system in the heart of Galway City. This huge preposition would solve the problems of traffic congestion in Galway and help cut back the cars on Ireland’s roads, eliminating more greenhouse gases.

The upcoming petition for the people of Galway isn’t the first we’ve seen of the Gluas; a local lobby group first put the idea forward in 2008 and again in 2015. Originally, 3 routes were proposed. Line 1 would start in Ballybrit, serving 8 destinations and end in Rahoon. Line 2 would run five stops Eyre Square to Barna. Line 3 would serve seven stops, beginning in Murrouh and ending at Taylors Hill. Once the Gluas was up and running, it was proposed that a fourth line be added, running from Eyre Square to Knocknacarra.

This cause is largely championed by one woman. Galway West TD, Catherine Connolly, is a firm believer in the advantages of the Gluas, and of the viability of one existing. Despite Minister Shane Ross describing the provision of a rail network in Galway as ‘excess of what is required’, Connolly is standing behind this ideal and has talked of the issue on Radió na Gaeltacha.

One point Connolly has made is that the government has now admitted that Ireland will fail to meet both its 2020 and its 2030 commitments in the Paris Agreements. She says that the Dáil’s excuses are ‘no longer acceptable given the challenges that we face with climate change. The provision of light-rail in the city is the clear and unambiguous solution and both community and business groups must come together to ensure the provision of light-rail in the city.’

As Galway City is predicted to grow in population to 124,000, it seems a solution to the environmental impact of its roads is needed . Both local community and government must face up to this problem.