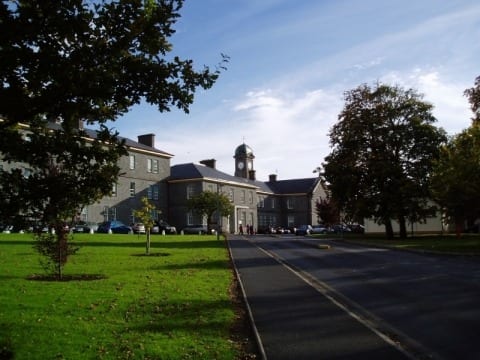 GMIT today welcomed the publication of a report for the development of the college’s Mayo campus and ring-fenced funding of €750,000 for the campus in Castlebar in each of the next five years.

Minister Mitchell O’Connor announced that there will be funding of €750,000 for the Mayo campus for each of the next five years while the plan is being implemented.

The announcement was made alongside the publication of the report by the Working Group, Developing a Sustainable Plan for the Mayo Campus of Galway-Mayo Institute of Technology.

President of GMIT, Dr Fergal Barry says: “The report’s aim, which sets out a plan to ensure a sustainable future for GMIT’s Mayo campus, is fully supported by the Institute and each recommendation will be implemented in full. The success of our Mayo campus is integral to the future of GMIT and its position as a driver of regional development.”

“The publication of this report and adoption of the recommendations is good news for our Mayo campus, for GMIT, for Castlebar town and for our region”.

“As an Institute we also look forward to the roll-out by government of a revised state funding model for Higher Education that will address the anomalies in the funding model and that will recognise the costs associated with the operation of all of our other campuses that are an equally integral part of our multi-campus provision serving the needs of our region.”

“This report is published against the backdrop of much improved admission figures for the present academic year across GMIT, with over 2,000 first year students welcomed in September.”

As recognised in the report, new courses such as the Mayo-based Early Childhood Education and Care helped drive this rise in interest, with over 500 applications for this course alone. The development of new programmes, which appeal to a wide range of potential students and serve the requirements of the local economy, is endorsed by the report and remains a key priority for the Institute. GMIT continues to create innovative courses, as shown by the ten most recent additions, which will be rolled out for the 2018-’19 academic year.” adds Dr Barry.

A spokesperson for the HEA says: “The HEA welcomes the announcement from the Minister today on the additional recurrent and capital investment to be provided to GMIT to facilitate the delivery of the sustainability plan for its Mayo campus. The HEA played a key role in producing this plan, chairing the Working Group, and we would like to thank all the other members of this Group who worked tirelessly to set out and agree a future path. We were struck by the commitment of campus staff, students and the wide range of stakeholders in the county and the region we met and the constructive way in which they contributed to finding a sustainable way forward.”

“Harnessing this continuing commitment will now be central to the plan’s ultimate success. We would also like to thank GMIT, and in particular its Governing Body, who were highly supportive throughout the process and who have made considerable commitments to support the campus’ future development. The Mayo campus is a critical piece of regional higher education infrastructure and we look forward to see it continue to serve its pivotal role in driving regional skills and growth.” added the spokesperson.

The Working Group’s recommendations will be implemented over the next five years, over the period 2018-2022, with a review of progress at the end of year two. There will also be formal progress reports to be submitted to the GMIT Governing Body and the HEA every four months.

Recommendations outlined in the report, to ensure the future of the GMIT Castlebar campus is secured, are as follows:

The GMIT Working Group was chaired by the HEA and comprised representatives of GMIT, the Department of Education and Skills and the HEA. The brief of the working group was to formulate a plan towards a sustainable future and growth options for GMIT Mayo Campus, Castlebar.

The Working Group engaged extensively with the local community and business interests, staff and students of GMIT, the executive and board of GMIT, local public representatives, and other stakeholders. This included a number of meetings and open fora.

To inform the work of the Group, a base of information was gathered including an analysis of labour market needs in the region, student supply and demand, the role of the further education sector and the impact of the campus on the local and regional economy. The views of external stakeholders were sought in relation to these matters and 23 submissions were received and considered by the Working Group.