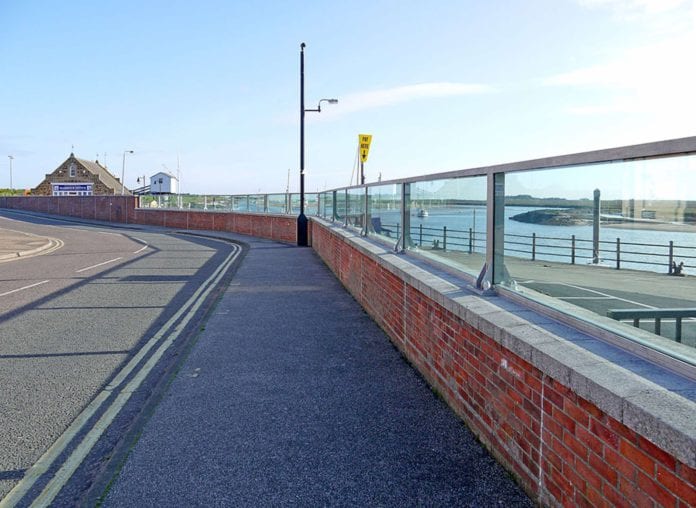 A glass flood protection barrier similar to the one used in the Waterford quay’s would be too expensive for for the length of the quay walls that would need to be covered.

Several councillors raised the idea of a glass barrier when discussing the new Flood Risk Management Plans the council has adopted this month.

However it was decided that, as pleasing as such a barrier would be to the eye compared with traditional flood walls, the cost-benefit analysis doesn’t add up.

A draft of the Flood Management Plans was presented to the city council this month for their approval to proceed.

The final set of flood containment walls will be built along Raven’s place and Eglinton Canal.

Down in Salthill, the plans would make use of existing high ground along the promenade to raise the road level, and create an embankment to stop flood waters from reaching the property line.

In 2012, the Office of Public Works designated 300 areas in Ireland as being at significant risk of flooding.

Various works in Galway are expected to cost between €1 million and €15 million euro to complete.

During the meeting councillors praised Minister Kevin “Boxer” Moran for his quick response to the flooding in Galway in January.

After visiting Galway in the aftermath of Storm Elanor, Minister Moran promised some €9 million to fund flood protection measures in Galway.

The minimum height for the new walls would be 1.2 metres above ground level. This would provide adequate protection from flood waters, but concerns were expressed about how they would affect the tourist value of those areas.

Councillor Declan McDonnell asked if the raised embankments in the Salthill area could threaten the protected view along there.

There is also the issue of the conserved architecture in and around the Spanish Arch, which would have to be protected.

However City Manager Brendan McGrath said that while he’s sure there will be objectors, he wasn’t going to apologise for doing what’s necessary to protect people’s property.

Acting Senior Engineer with the Council Carmel Kilcoyne said that because neither the Long Walk nor the Docks were the property of the city council, property owners would have to be consulted on any works to be done there.

In addition, care will have to be taken when working on the wall and embankment at Nimmo’s Pier to avoid exposing the old landfill site.

One measure that the plans suggest could improve flood prevention in Galway Bay is developing improved tidal forecasting.

According to the OPW, a twice daily forecast service it makes available to local authorities could provide surge, astronomical tide, and total water level predictions as much as 65 hours in advance.

However, debate during the meeting on the merits of temporary flood barriers revealed that those normal predictions would do little to protect Galway from the kind of flash flooding we saw during Storm Elanor.

Councillor Declan McDonnell had asked whether it would be viable to have temporary barriers that could be erected before a flood and dismantled afterwards, as he had seen used in Germany.

However Ms. Kilcoyne said bluntly that because of the unpredictable conditions on the bay, in the event of a storm like Elanor there simply wouldn’t be time to get the barriers up.

One preventative measure contained in the plans is a Voluntary Home Relocation Scheme, compensating property owners in high flood risk areas to move of their own accord.

Councill Collette Connolly asked if there would be an age limit on what buildings qualified for voluntary relocation.

“The last thing we want to do is reward developers who have knowingly built in a flood zone,” councillor Connolly said.

The Flood Defence Plans, which are still in a very early stage, will be jointly administered by Galway City Council and the OPW.