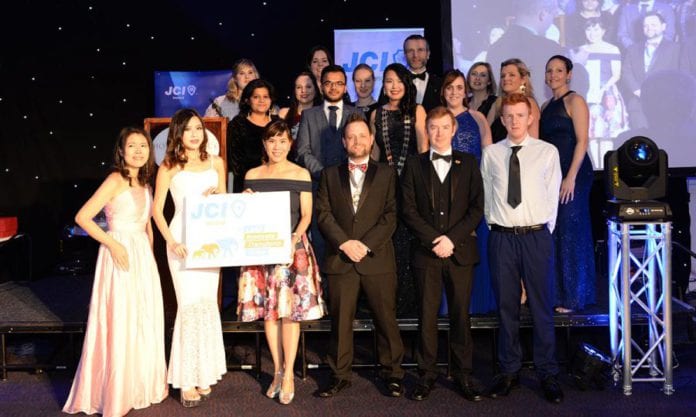 The JCI Ireland is a voluntary organisation that aims to train young people as leaders and get them active in their local community.

The annual National Convention was on this month at the Harbour Hotel, with a follow up awards ceremony at the Meyrick in Galway city.

President of JCI Galway Carol Ho was named the ‘Most Outstanding Local President’ in Ireland at the awards ceremony.

Carol is a digital marketer and networker who moved to Galway less than a year ago, but immediately dug in to see how she could could work for the community.

“We are working extremely hard this year to connect with the local community, such as leading the teams in Ireland for World Cleanup Day in September,” Carol said.

“We have a significant membership growth this year as the young people in Galway see the work we are doing can help them for personal growth.”

Carol will go on to represent Ireland at the JCI European Conference in Lyon next year.

Jason Sherlock was declared to be the ‘Most Outstanding New Member’ of anyone in Ireland.

This year JCI Galway re-launched the “Galway Tourist Guide” for its 46th edition highlighting the best tourist attractions in the city and county.

The first 200 copies of the guide were distributed to Irish and International JCI delegates visiting Galway from our continents for the conference.

The project of Galway Tourist Guide was led by 2016 President and Convention Director Keith Killilea.

Its success was marked by taking home the ‘Best Economic Development Project’ award from the night.

Keith Killilea said the guide is an “important development for the city and county for tourism as well for small businesses, and we are happy to have all the support again from all the previous advertisers.”