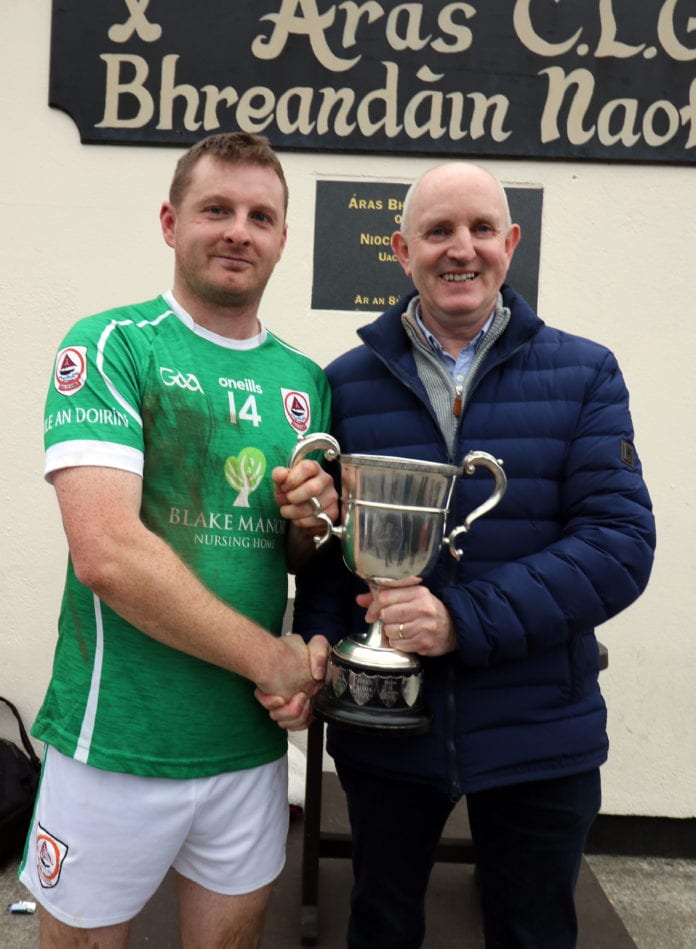 After going to replays in the semi-final against Oranmore/Maree as well as this decider with Killimor, captain Colm Gill was looking forward to a few breaks before Ballinderreen turn their attentions to the All-Ireland series in Raheenagh.

Gill struck a fifth minute goal in the drawn match as the south Galway side went 1-6 to 0-3 ahead but Killimor managed to peg them back to force a second day out.  And their opponents refused to throw in the towel again as the teams were all square with 10 minutes left.

But Ballinderreen finished strongly with four answered points.  And Gill himself nearly bookended the double header when his late shot rattled off the post before Allen Martyn got their final score.

“I thought it was gone in,” said Gill afterwards.  “I couldn’t believe it when it hopped out again.  It would have been nice cushion for the last few minutes but thankfully the boys stood out strong at the back and they came strong for the finish.

It didn’t look like it with a few minutes to go.  It was looking like another draw but thankfully the boys pegged over a few scores.

“Fair play to Killimor.  We got a good lead on them the last day and they brought us back and the same thing happened today.  They’re a hard team to kick off and thankfully our backs, midfield stayed strong at the finish.  And we got a few scores at vital times towards the end just to kill it off.”

Ballinderreen did have an early goal chance after Gill set up Hugh Moylan for a penalty.  But Aidan Duffy’s fierce effort was saved by Killimor’s Garry Keane.

“We drew the semi-final as well so we’ve four tough matches played now in the last few weeks.  It’s no harm to get a break now.”