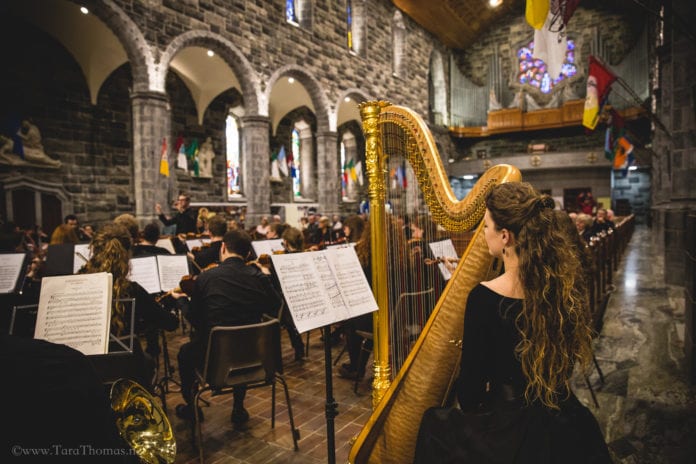 Galway’s homegrown Esker Festival Orchestra is back in town this Friday with an evening of classical classics performed by some of the best young musicians Ireland.

The Esker Festival Orchestra was founded here in Galway to provide meaningful musical opportunities for young musicians from around Ireland.

It lets young people not only join an orchestra, but socialise and perform with other people like them.

Nurturing classical music without putting an undue financial burden on the young musicians who love it.

As part of their 2018 Festival Tour, The Esker Festival Orchestra are performing at the Emily Anderson Concert Hall, NUI Galway at 8pm on Friday, August 10.

Tickets are €15 or €10 concession and can be bought online or purchased at the door.

The 2018 programme consists of Ludwig van Beethoven’s Symphony No. 7 in A major, Maurice Ravel’s Piano Concerto in G major with piano soloist Ellen Jansson (Cork School of Music) and 2016.4by the young Irish composer, Sebastian Adams.

The orchestra will be conducted by Galway man Peter Joyce.

Peter started playing the saxaphone at age 11, and by 15 he was travelling to and from his home in Esker to study the sax and clarinet in Dublin.

He’s played with everyone from the RTÉ Symphony Orchestra to Imelda May, and is currently studying conducting at the University of Vienna.

She’s won multiple awards at the Electric Ireland Feis Ceoil, both performing solo and in a group.

Recently she finished up a tour of the south with the Belvedere Trio and later this year they’ll be performing at concerts in Germany and Sweden.

Sebastian Adams is an Irish composer, viola player and artistic director. He’s been the composer in residence with Lyric fm in 2016 and has been commissioned with the Irish Chamber Orchestra and both RTÉ orchestras.

The music he composes has been performed by Crash Ensemble, Kirkos, Benyounes Quartet, Fidelio Trio, Sarah Watts, Carl Ludwig Hübsch, Lina Andonovska, and many others.

After their concert in Galway the Esker Festival Orchestra will be at the Curtis Auditorium in the Cork School of Music on Saturday, August 11 at 5pm.

Then it’s on to St. Anne’s Church, Dawson st in Dublin on Sunday, also at 5.

The Esker Festival Orchestra is supported by the Irish Association of Youth Orchestras, The Arts Council, RTÉ Supporting the Arts, NUI Galway and CIT Cork School of Music.