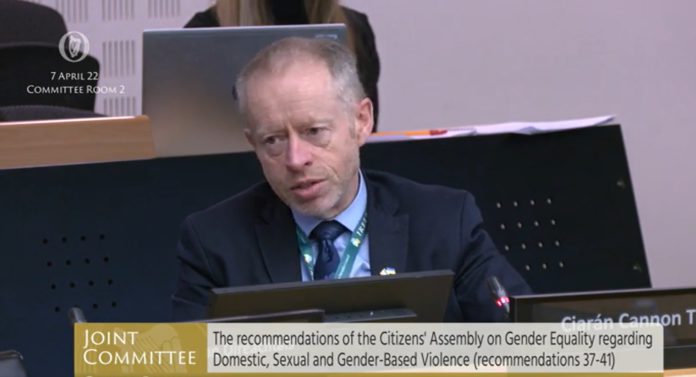 Deputy Cannon said that it is unfortunate that there is no plan to protect girls from FGM in Ireland, a decade after specific legislation was put in place targeting it.

The Fine Gael TD was speaking during a sitting of the Joint Oireachtas Committee on Gender Equality, discussing the recommendations of the Citizens Assembly on this issue.

Deputy Cannon said that he wasn’t aware of the risk of FGM to young women and girls in Ireland until his work with Irish Aid.

He thanked the witnesses from Akina Dada wa Africa (AkiDwA), a network of migrant women living in Ireland, for the work their organisation has done in highlighting the issue.

“We have had legislation in place for almost ten years now. It is a decade on. It is most unfortunate that we do not have the national action plan in place to match that.”

“I hope it will be helpful to the witnesses and their work if this committee focuses on getting some action on that as part of the work we are doing.”

Research by AikiDwA estimates that there are almost 6,000 women living in Ireland who have been subject to female genital muilation.

“Some 6,000 girls under 15 years old who are born or are living in Ireland but who originate from FGM-affected countries are at risk of female genital mutilation,” she said.

“Current supports available to victims and survivors of FGM are not sufficient, as there is currently only one clinic targeting this cohort of migrants.”

“Regarding physical supports, the impact of FGM on women range from being unable to do or enjoy intimate activities with their significant others to difficult labour and childbirth, among others.”

“In terms of psychological supports, one of the adverse impacts of FGM is on women’s psychological health. This group needs culturally appropriate services to help them cope with the trauma caused by the mutilation.”

The Criminal Justice (Female Genital Mutilation) Act was signed into law in 2012, making it an offence to perform or attempt an act of FGM, or to take a girl or woman from the state for the purpose of having it done elsewhere.

Ireland saw its first ever conviction for female genital mutilation in January of 2020, when two parents were convicted of carrying out FGM on their one year old daughter.

They now face retrial after the conviction was quashed last November due to deficiencies in the translation of their testimony at trial.

Deputy Cannon asked what engagement is possible at the school level to that could effect cultural change that would help to eradicate this.

“How important is it right now to have a programme of education within our school system, at primary level and perhaps more important, at post-primary level, that could somehow effect a cultural change so the practice of FGM would no longer be tolerated anywhere within Irish society?”

Dr Caroline Munyi said that AkiDwA had “varying levels of success” engaging with education professionals, due to the age of the victims, and the topic they want to address.

She also noted that this is a “hidden problem” because of where on the body it effects, but that they hope to engage with the education sector to survey how teachers feel it can be addressed..

Dr Mbugua added that including FGM within sex education must be done in a sensitive way, due to the traumatising nature of what it is discussing.

“To be honest, it is a very foreign issue and we welcome the fact that Ireland is open to even discuss it.”

“Engaging with schools has been very challenging. However, we are trying to create discussions with teachers in the hope that they can then move it forward.”

Community engagement, and having people of diverse backgrounds among teachers were among the options highlighted by the two in response to Ciaran Cannon’s query about what the “most powerful levers or mechanisms” available to combat FGM right now.