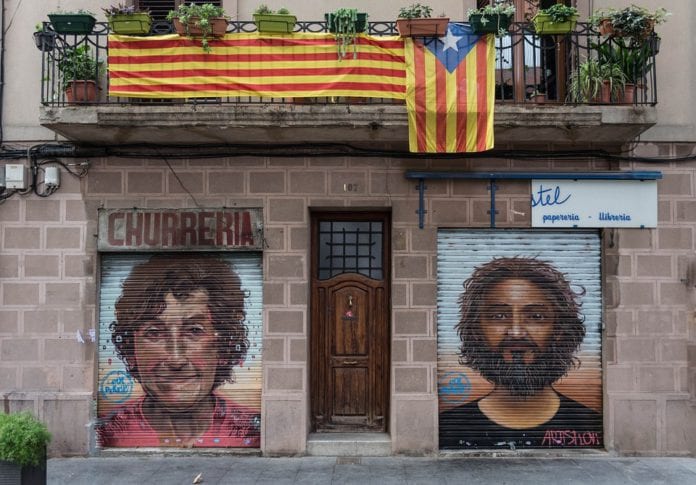 Catalonia’s independence referendum, planned for tomorrow, Sunday, is a major test for democratic principles in Europe.

This is according to Galway West – South Mayo Senator, Trevor Ó Clochartaigh, who is in Catalonia’s capital Barcelona as part of a forty-strong international delegation to oversee the referendum.

The referendum has been described as illegal by the Spanish government which has attempted to prevent the vote from taking place.

However, the Catalan government has decided to press ahead with the vote, and will declare independence from Spain by Tuesday if the majority of the region’s people vote to be an independent country.

“What strikes me is that this is a very peaceful, positive and imaginative campaign, implemented on foot of a huge community mobilisation which has created the political impetus to allow citizens the opportunity to decide their own future,” the Sinn Fein senator said, speaking from Barcelona.

Supporters of an outlawed independence referendum in #Catalonia rally on the final day of campaigning pic.twitter.com/2MvS4GTK6r

Senator Ó Clochartaigh said that people are concerned that fundamental human rights such as freedom of speech and the right to self-determination are being abused.

“The Spanish authorities have taken over financial control of the Catalan budget, they have arrested politicians and public servants and closed down hundreds of civic society websites in an effort to stop the referendum on Sunday.

“The Spanish government maintain that the referendum is unconstitutional, however Catalan stakeholders tell us that they believe that the same court is politically motivated and that there are contradictions in the constitution when it comes to the autonomous rights of the Catalan government versus the sovereignty of Spain.

“One of the major criticisms we are hearing is that the EU has made no statement on what the Catalans see as infringements of their fundamental rights and they are calling on them for support in this regard.

“The cat and mouse game that is ongoing between the Spanish state and the Catalan government in relation to the provisions for Sundays vote will create a situation where the democratic process itself is called into question and the coming days will be historic in many ways for Catalonia, Spain and the whole of Europe no matter what the outcome,” added Senator Ó Clochartaigh.

Protests against the referendum also took place in Barcelona and across Spain today.