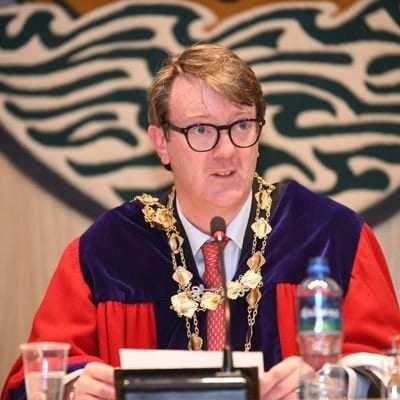 Mayor of Galway councillor Niall McNelis was punched in the face when he tried to help a young woman being assaulted by a man on the Wolfe Tone Bridge over the weekend.

But the most disappointing thing about the incident, he’s said, is that no-one else who was nearby tried to help the woman, and several stopped to film him being attacked on their phones.

Martin Ward (26), who has no fixed address, appeared before Galway District Court on Monday charged with assaulting the Mayor.

He was remanded in custody and Judge Mary Fahy ordered him to appear before the court again next Monday by video link from prison.

Ward has also been charged with being drunk in public and engaging in threatening and abusive behaviour on the Wolfe Tone Bridge on the same day day.

The Gardaí are currently awaiting directions from the Director of Public Prosecutions on how to proceed.

Mayor McNelis said that Galway is a “very safe” city, but acknowledged that there is an issue with public drinking.

The incident happened when McNelis saw a young woman being assaulted on the bridge and tried to step in.

According to the Mayor, Ward said that he had a “blade”, causing him to take a step back, and that’s when he was punched in the face.

“What shocked me is nobody else came to the young woman’s assistance and nobody else intervened when I was assaulted,” he said.

Only one woman chose to do something, calling the gardaí and assuring him that they were on their way to help.

The Mayor was not seriously injured and didn’t require any medical assistance. He said he understood the young woman wasn’t hurt either.

But he called out the lack of public spirit of several people who stood nearby and recorded the incident on their phones, rather than trying to help.

Galway city recently had its Purple Flag status renewed, one standard of which is lower levels of crime and anti-social behaviour.

But the award was criticised by city councillor Mike Crowe during the renewal process last year as being “a bit fluffy”, adding that it hasn’t made the city any safer.