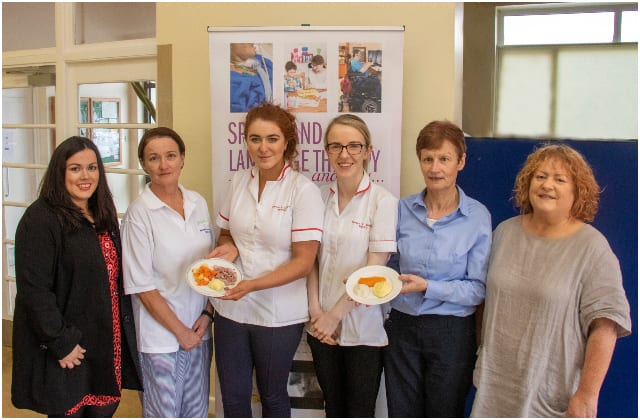 University Hospital Galway has launched a new diet standardisation for patients with Dysphagia, the medical term for swallowing difficulties.

According to Geraldine Keenan, Speech and Language Department Manager at GUH, many patients in hospital who require a special diet to prevent them from choking or food from entering their lungs and causing illness.

Many older patients who have had a stroke, a brain injury, or cancer of the head/neck will have a ‘Clinical Swallow Evaluation’ carried out by her department to determine the most suitable diet for them.

The manner in which that diet is categorised at Galway University Hospitals will now be determined by newly released international guidelines.

“In the past in Ireland we identified modified diets and fluids by grades of fluid and textures of food. Other countries had different ways of categorising diets,” Geraldine said.

“The new grading system is being introduced into all hospitals in Ireland and around the world for safety reasons.”

“No matter where patients are being treated, their modified diet/fluids will be identified in the same way.”

This means that even if people need to go to hospital while abroad on their holidays, the same system will be used to determine their diet based on their needs.

“We have worked closely with our colleagues in the Catering Departments in both University Hospital Galway and Merlin Park University Hospital to introduce the new way of identifying modified diets/fluids and their support has been essential for the smooth transition to the new system.”