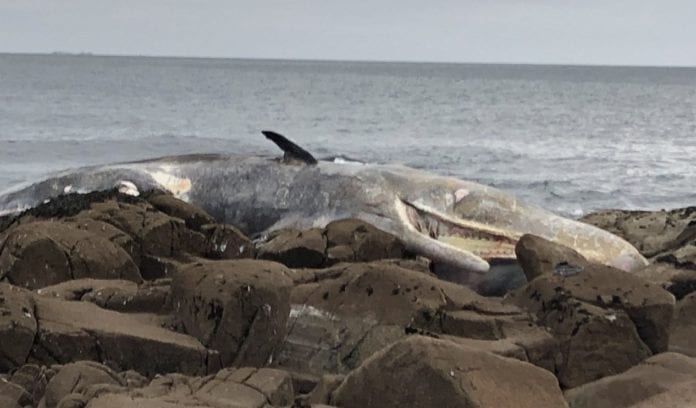 Calls have been made for a unified response protocol to strandings of large whales after multiple have been washed ashore this year including a sperm whale in Connemara.

The 40ft Sperm Whale which washed ashore dead at Mace Head near Carna in April was one of four large whales beached in Galway, Sligo, and Donegal within a short time this year.

The Irish Whale and Dolphin Group says that while it may not be possible to refloat large whales which become stranded on the beach alive, they could be euthanised or provided with first aid to reduce their suffering.

Where whales wash ashore already deceased they can prove extremely distressing for people as it can takes days or more for them to decay enough for the water to carry the remains away again.

Dr Simon Berrow CEO of the IWDG says “strandings, both live and dead, of large whales are not common in Ireland but do occur and we need a protocol signed off by relevant partners, including government agencies, so we can respond quickly and efficiently in such cases without having to phone around looking for resources and support”.

Dr Berrow emphasised that they are not seeking large financial resources, simply better coordination of those that already exist and have provided assistance in the past.

“What we are looking for is an agreed protocol, signed by key partners, to provide assistance and resources that are already available.”

“This might be a JCB or tracked vehicle from local authorities, boats from the Coastguard or RNLI, access to vets from the Regional Vet Labs and/or ballistic experts from the department of Defence.”

The IWDG has pushed for this protocol in the past, and drawn up policy documents which show how it could be implemented, but reissued their call after the stranding of a large fin whale in Dublin recently.

Such protocols already exist exist elsewhere. Both the Netherlands and Northern Ireland have drafted guidelines which coordinate the efforts of various NGOs and government agencies to handle live and dead beachings.