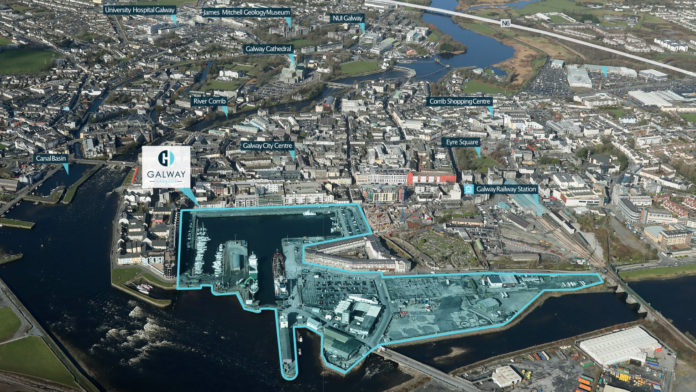 Galway residents should ensure their voices are heard on the proposed Inner Harbour development, which will have a radical impact on the future of the city.

That’s the message from Labour Councillor for Galway City-West, Níall McNelis. He was speaking following a briefing for local Labour members on Thursday evening, which was addressed by Port of Galway CEO, Conor O’Dowd.

The redevelopment of the Inner Harbour area of Galway City would encompass 7.6ha of land that is currently mostly used for the Port of Galway.

Should the large scale expansion of the Port be approved, this would free up this land for the construction of a new urban quarter by the waterfront.

The framework for the redevelopment of the inner harbour proposes a mix of residential, commercial, cultural, and recreational buildings which would average six to eight storeys tall.

While most of the buildings would be residential apartment blocks and commercial/office space, it is also proposed that there would be a hotel, and multiple buildings for cultural uses, water based leisure activities, or other recreational purposes, along with landscaped public spaces.

Councillor Niall McNelis said that this project, if it goes ahead, would have a “significant impact” on the shape and size of the inner city, and that a “robust” public consultation is essential for such ambitious proposals.

“There is much to consider in the outline proposal put forward, including the potential role of this space as an interchange point for greenway and cycle routes, the extent and nature of any housing to be provided, and the height profile of the area.”

Councillor McNelis welcomed Mr O’Dowd commitment the more than just commercial uses would be considered in any new role for the harbour.

“The potential, noted by Mr O’Dowd, for significant cultural infrastructure and spaces within this footprint is also to be welcomed.

He added that it will “require significant engagement with various elements within our creative and cultural communities, to ensure what results is in the best interests of that sector.”

The consultation process for this proposal is open until 16 June at galway-harbour.com, and residents of the city are being urged to review the plans and make a submission.