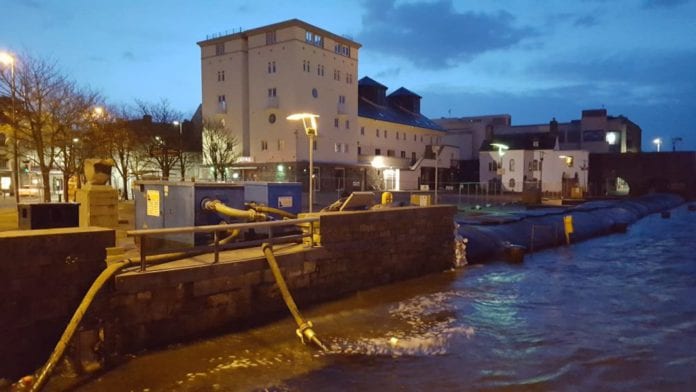 Galway has so far been relatively unscathed by Storm Callum with no reported power outages or serious flooding.

There were fears that Callum could cause flooding in the city as it coincided with the high tide.

The city council reports that there was slight overtopping at the Docks and some water on the Prom in Salthill.

But despite very high water levels, there was no reported flooding in Galway city when the tide passed just after 8am.

Water came close to busting its banks down by the Spanish Arch and Wolfe Tone Bridge, but with preparations in place there was no incident.

Roads that were closed in the city centre last night are re-opening, with the Prom to re-open later once stones and seaweed have been cleared.

It’s hoped that Salthill will re-open to traffic shortly after noon.

During the night come motorists took to removing bollards an barriers placed at closed roads, forcing the council to issue an update that those roads were still shut this morning.

Mace head recorded highest winds of 113km/hr around 8am this morning, below predictions that there could be sustained winds as high as 130km/hr.

Nationally, there are some 30,000 homes without power throughout Ireland this morning.

Most of those are in the Southwest, particularly Cork and Kerry, but the ESB is not reporting any outages in Galway this morning.

Bus and rail services are mostly operating as normal. Bus Eireann have advised that Route 401 in the city is operating from Stop 6 in Eyre sq this morning, and Route 350 by the Cliffs of Moher is nor operating.

Similarly Irish rail is reporting no disruptions on the Galway line this morning, with all services operating as normal nationwide.

Met Eireann reports that Storm Callum is currently moving up long the Northwest coast of Ireland this morning.