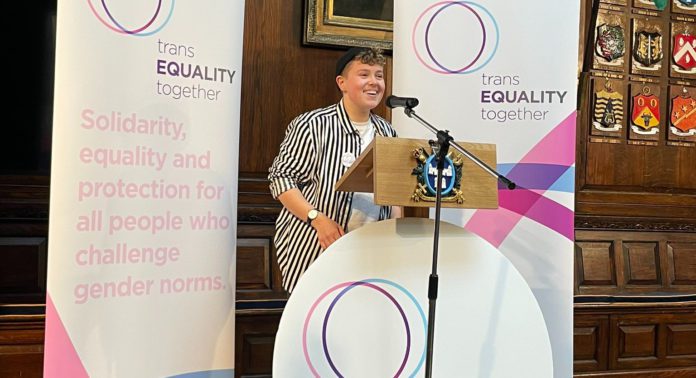 A young transgender man living in Galway has shared his experience of being a trans person in the West of Ireland at the recent launch of a new coalition, Trans Equality Together.

Tiernan Arnup (25) grew up in Co. Clare and now works for the regional LGBTQ+ charity organisation AMACH! Galway, which is a member of Trans Equality Together.

Speaking at the launch, Tiernan Arnup spoke about struggling to access services, support and information because he is trans.

He said that he has put off going to the doctor, the bank and the dentist, as he fears not being accepted, respected or understood.

“It is not necessarily easier elsewhere in the country, but often, when I do seek support, information and help to navigate these new challenges, I am almost always directed and redirected to the same Dublin-based services,” said Tiernan.

Tiernan said that while it is wonderful that these services exist, they don’t necessarily understand what it is to be trans in the West and rural Ireland.

“This is an opportunity for education as much as it is for progression.”

Led by Transgender Equality Network Ireland (TENI), Belong To and LGBT Ireland, Trans Equality Together says its objective is to create an Ireland where trans people are ‘equal, safe and valued’.

They want to promote positive attitudes towards trans and non-binary people in the West of Ireland and advocate for policy and legislative changes that will improve the lives of trans people and create a equal society for all.

They also aim to counter the negative and false messages about trans people that have been circulating in recent years.

The aim is to demonstrate to politicians, policymakers and the wider public the breadth of support that exists for trans rights and the challenges that we, as a community, are facing right now,” said Sara.

Moninne Griffith, CEO of Belong To and Co-Director of Trans Equality Together, said that trans people in Ireland are a tiny minority of the population whose voices have rarely been heard in national discourse.

“They have been marginalised, denied access to healthcare, and demonised in the press.

“Trans Equality Together will work to create an Ireland where trans people are equal, safe and valued.

“We want to promote positive attitudes towards trans people, counter the negative and false messages that have been circulating in recent years, and work to achieve policy and legal changes – particularly in relation to gender recognition and healthcare – that will really improve the lives of trans people.

“We do not want to see the sort of divisive rhetoric and villainisation of trans people taking hold in Ireland that we have witnessed in other countries.”