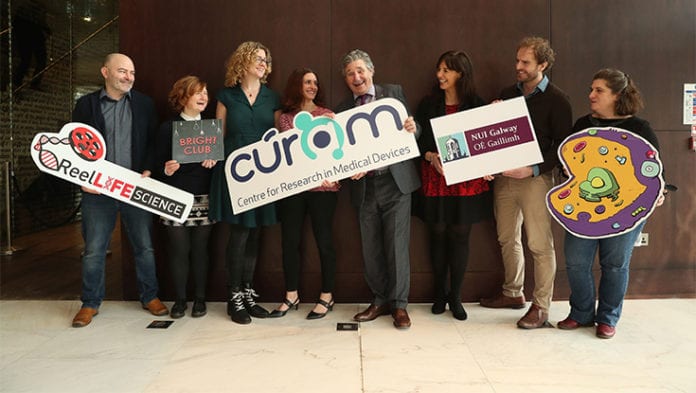 Four Galway based projects have been awarded funding worth over €400,000 to achieve their goal of getting 100,000 people engaged with science.

The four science based public education and engagement programmes are based out of NUI Galway.

They’ve been awarded grants from Science Foundation Ireland’s Discover Programme that come to over €400,000 which were announced by Minister for Training, Skills, Innovation, Research and Development, John Halligan

The largest share of the funding went to Cell EXPLORERS, which received €297,778.

Cell EXPLORERS is programme that engages people with science through hands on activities at school visits and science festivals.

Developed by Dr Muriel Grenon at NUIG, it now works out of 13 Higher Education Institutes around the country and has reached 32,000 people since its beginning.

CÚRAM medical devices research centre’s ‘Strength in Science’ project was awarded €47,650 to work with teachers, and fitness instructors, to help get secondary students interested in both science and exercise.

In Ireland, physical inactivity is thought to be responsible for 8.8% of the burden of disease from coronary artery disease, and 10.9% of type 2 diabetes.

Despite this only one in ten secondary students in Ireland get the recommended 60 minutes of PE classes a week.

CÚRAM is creating four lesson plan kits that link their research with the effect exercise can have on reducing the chance of diseases in different body parts.

These are expected to launch later this year at participating schools in Galway and Dublin.

Galway’s most novel variety shoe Bright Club has also been recognised for its unusual way of bringing science to people.

Bright Club is a comedy show with a twist, lettering researchers from every field get a bit of training in humour before joining professional comedians on stage in a live show.

Having held 50 live events with 150 academics taking part over four years, Bright Club has been granted €49,797 to continue its fun work.

And lastly ReelLIFE SCIENCE has been €12,000 to further its science video competition.

Since being launched in 2013 by Dr Enda O’Connell, has engaged thousands of young people in more than 350 schools and community groups around Ireland.

Participants are challenged to produce a short, entertaining and educational STEM video for the public, while developing their communication and digital skills.

The best videos win €1,000 for their school or group and are screened at the Galway Science and Technology Festival in NUI Galway every year.

Professor Lokesh Joshi, Vice President for Research at NUI Galway, said the university is committed to education and outreach programmes for its STEM activities.

He added that these four groups “have provided these programmes to students, teachers and the wider public throughout Ireland to encourage interest in STEM in a fun and engaging way.”

“Through SFI Discover we harness the creativity of diverse engagement initiatives to motivate more people to explore STEM in meaningful ways, and we aspire to create a brighter future for Ireland together.”