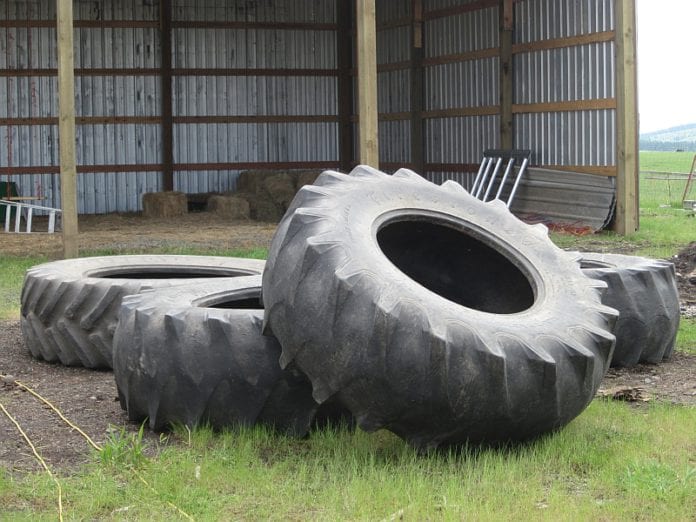 Farmers in Galway and across the west of Ireland brought 140,000 tyres to be recycled at Athenry as part of a national drive.

The IFFPG, a non-profit that recycles plastic waste produced at farms, led the initiative with drop off points in four parts of country.

The one in Galway was at Athenry Mart earlier this month, gathering tyres from almost 800 farmers in just 10 hours.

The government provided a €700,000 subsidy for this drive so farmers could recycle their tyres cheaply, in order to encourage more to come out.

With this offer, farmers could recycle up to 330 tyres for just €45, while the normal commercial rate would have been €500 for the same amount.

According to the Irish Examiner the four bring centres gathered more than 400,000 tyres at drop off points in Galway; Cootehill, Cavan; New Ross, Wexford; and Gortdrum, Tipperary.

For the first three tonnes they brought farmers were only charged €15 per tonne, rather than the full price of €160.

One tonne of tyres is the equivalent of 110 car tyres or 14 truck tyres.

Galway East TD Sean Canney encouraged farmers to come out, not just to clear waste from their farms, but to support Irish jobs in the recycling industry.

Roughly half of the tyres gathered were recycled at an Irish-owned facility in Drogheda, while the remainder were shipped abroad.

According to the IFFPG, tyres have been accumulating on farms for nearly 25 years as farmers made the shift from pit to baled silage.

In pit silage, tyres are often used to anchor down plastic coverings, something that’s not needed with baled silage.

2,229 farmers came out to the bring centres this month, with the average farmer dropping off 220 tyres in a big win for recycling.

In the past year the government has brought in new regulations governing the supply and storage of tyres meant to stop them from building up and encourage recycling.