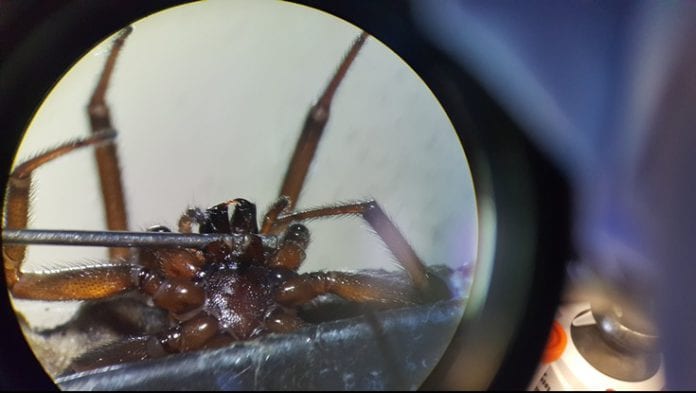 Three people in Ireland have been bitten by these fast-breeding creatures and NUI Galway’s researchers have investigated their bites.

The first true case of a False Widow spider bite was identified in the UK in the 1990’s and in Chile last year.

There has since been five additional reported cases, three in Ireland and two in the UK.

NUI Galway’s researchers say this particular species of spider is having a negative effect on other local species and spiders in Ireland due to their competitiveness and fast breeding nature.

The spider can live up to a terrifying seven years, whereas most spiders are lucky to see their first birthday, and it thrives only in cities and urban areas.

Researchers at NUI Galway have studied the spider in the most intensive research carried out on this species to date.

The study was recently published in two separate research papers in international journals. One showed that the False Widow spider is taking over Ireland and is an invasive species with a detrimental effect on native species.

The second journal, Clinical Toxicology, showed five reported cases of False Widow bites in the UK and Ireland that have provided the world’s first verified identification guide on how to treat bites from this spider.

Led by Dr Michel Dugon, the research team based at the Venom Systems and Proteomics laboratory in NUI Galway made the discovery while investigating the potential of local bugs that included the venom from the False Widow spider, as a source of novel therapeutics to develop medication to treat illnesses ranging from bacterial infection to cancer.

This is the only laboratory in the world currently working on taking venom from The False Widow spider for potential therapies.

Dublin, Cork and Wexford have the highest number of False Widows to date.

Dr Michel Dugon, lead author of the study from the Ryan Institute at NUI Galway, said: “While it is extremely unlikely that a bite will ever be fatal, we do need to consider bites from False Widows as a potential health risk given the increase of this species not just in the UK and Ireland but also mainland Europe and the US.

“We hope that our study will help to address some of the public’s concerns about these spiders and will provide healthcare professionals with the information required to accurately diagnose and report bites associated with the False Widow.”

The False Widow spider arrived in the UK about 100 years ago and began colonising Ireland from Britain over the past 20 years.

The venom from a False Widow spider is a lot more powerful than the researchers expected, producing about one tenth of a millionth of a litre of venom.

This study was funded by the Irish Research Council.