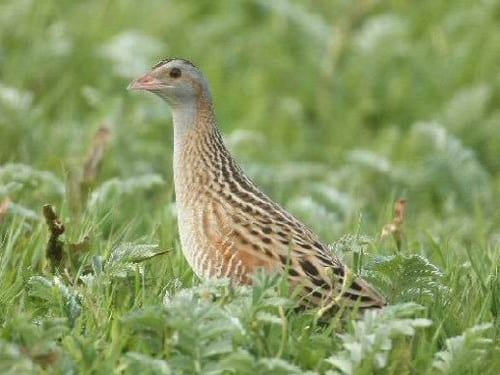 a multi-million project to increase the Corncrake population along the west and northwest coast of Ireland was launched this week.

The Corncrake LIFE aims to revive the fortunes of the Corncrake in Galway, Mayo, and Donegal in coastal and island locations.

By the end of its five year period, the project aims to deliver a 20% boost to the bird’s population levels, which have decline dramatically.

Since the 1970s, the Corncrake population has fallen by as much as 85%, with a similar decrease in their habitat range, effectively confining them to Connacht and Donegal, including offshore islands.

Only 188 examples of calling males were recorded across Ireland in 2021, of which around 20 were in Connemara.

Dr. John Carey of the National Parks and Wildlife Service, who manages the project, said that it will primarily focus on habitat creation and restoration, though some “new and innovative” conservation approaches will also be attempted.

“The project will be developing knowledge exchange groups with farmers and advisors to share information on how to create and maintain high quality corncrake habitats”.

It will also “ensure that landowners can maximise their potential to receive rewards under the results-based pilot scheme.”

The project will see the LIFE team working with farmers and landowners to improve the landscape for the highly endangered bird.

Locally-based field officers will provide guidance, direction and support to landowners, and community engagement efforts will include targeted schools programmes.

The project was originally supposed to commence in January of 2020, after securing funding the previous December, shortly before the COVID pandemic hit.

The €5.9 million budget for the projects includes €4.3 million from the EU.

The project was launched on Friday by Ministers of State Malcolm Noonan and Pippa Hackett.

Minister Hackett said “I am delighted that the Department of Agriculture, Food and the Marine is a key partner in the Corncrake LIFE project.”

“My Department’s involvement reflects our increasing awareness that we need a more a cooperative approach to agri-ecology in our landscape.”

The project is a collaboration with the Department of Agriculture, Food and the Marine, GMIT, Údarás na Gaeltachta and Fota Wildlife Park.

Tech solutions will explore innovations such as flushing bars fitted to tractors to scare birds away from mowers, thermal imaging drones to find nests, and passive acoustic monitoring using high-tech microphones in an attempt to help locate the highly elusive birds.