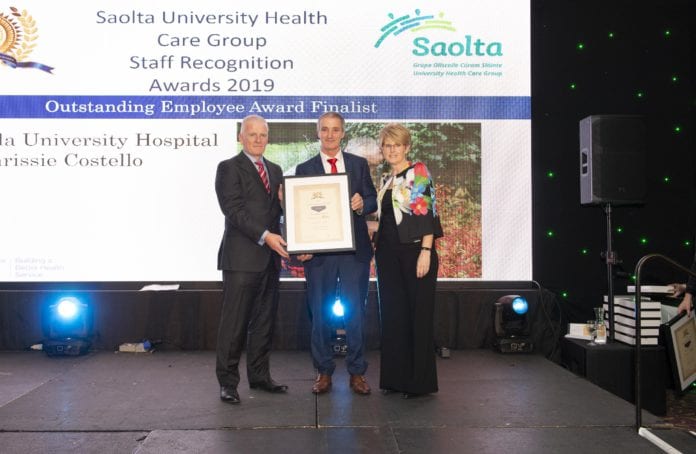 Christie Costello, who has been working with the Maintenance Team Grounds Staff for more than 22 years, was presented with the award for ‘Outstanding Employee’ at the awards which take place every two years.

Portuncula Hospital was shortlisted in a further two categories in the awards – the Quality Improvement and Patient Experience Award (Targeted Anti D Team) and the Education and Training award (Sandra Brandon and Mary Diskin) for a staff learning event on dysphagia in the stroke population.

More than 160 nominations were received from across the Saolta Group of hospitals for six award categories.

The event was hosted by Mayo Senior Football Manager James Horan and the awards were presented by Saolta CEO Tony Canavan and Chief Director of Nursing and Midwifery, Jean Kelly.

Commenting on Christie’s award, James Keane, General Manager at the hospital said: “Christie is the person making sure that things get done in the background, with no fuss and no request for his help is ever refused.

“He makes sure that the front of the hospital is maintained to a very high standard and we are very proud of him and the work that he does.”

The Saolta University Health Care Group Staff Recognition Awards take place every 2 years and aim to recognise the important role that staff play in delivering services to patients cared for in all six hospitals in the Group.

All applications are judged by an independent panel and the event is self-funded through sponsorship.