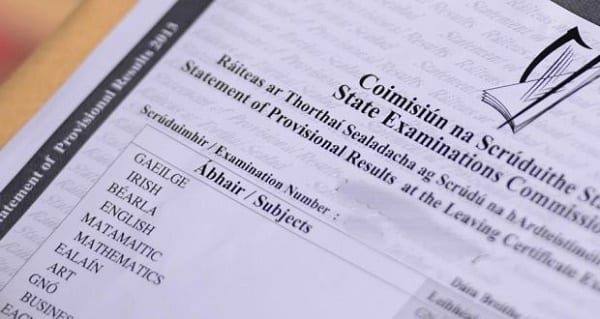 Roughly 6,500 students will have some of their Leaving Cert results increased as a result of two serious errors found in the calculated grades system this week

“These are errors that should not have occurred,” Minister Foley said, but she said that they will “not disadvantage” any students after being fixed.

The Secretary General of the Department of Education told Minister Foley on Wednesday that an error had been spotted by the Canadian company Polymetrika International, which is developing the statistical software for the students’ data.

Minister Foley said that the error arose from one line of code out of 50,000, which “we knew would impact” the results of some students.

The Minister said that it was important to find out as much as possible about the error before making an announcement, so the company began an analysis of the software code.

The system was meant to look at aggregated Junior Cycle results, taking their results in Irish, English, and Maths, and combining them with their best two, non-core subjects to help in calculating grades.

Instead the error resulted in the students two weakest non-core subjects being added to their Irish, English, and Maths results.

A further error was uncovered by the Department after a review, where the CSPE results were not discarded by the calculated grades system the way they should have been.

This all led to approximately 6,500 students receiving a result at least one grade lower than they should have properly.

The international company ETS were then brought in to carry out their own independent examination of the calculated grades code, which is expected to be completed in coming days.

Those who were marked down as a result of either of these errors will have their proper grade restored Minister Foley said.

Some students also received a higher grade than they should have as a result of these mistakes, but these will not be altered in any way she said.

“When all our checks are completed we will issue the corrected results to the students affected,” Norma Foley said.

“As soon as it is possible to do so, every student affected will be contacted by text, and informed whether they are impacted,” and directed to a new online portal issuing corrected grades.

The Minister acknowledged that this will be “distressing” for many students who thought they were done with the issue of the Leaving Cert and calculated grades this year.

After the correct grades have been issued, the CAO will determine how many students would have been eligible for a higher course preference in a previous round of offers.

The Department will work with the CAO and Higher Education Institutions to see about accommodating students at the courses they should have been offered.

“I want to acknowledge that students have had an exceptionally difficult year. They’ve coped unbelievably well with the COVID-19 challenges. They don’t need this upset and dismay.”