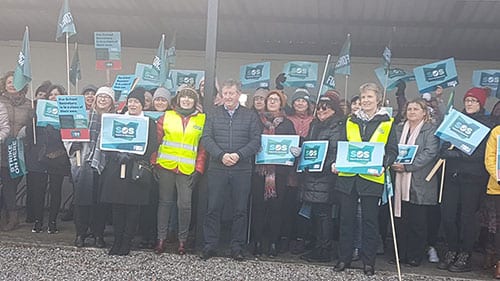 Galway TD Sean Canney has said that he supports school secretaries in their fight for equal pay and working conditions with the Department of Education.

Over 1,000 primary and secondary school secretaries with the Forsa trade Union plan to hold a one day strike later this month, but have said that comments made by Tánaiste Leo Varadkar could represent a “breakthrough moment” in helping to avoid industrial action.

In response to a question by Deputy Canney in the Dáil, Leo Varadkar said of school secretaries, “Schools would not operate without them, and I think that the role they play in our education system is as important as that played by school teachers, SNAs and school principals.”

“For that reason, it is the objective of this government to regularise their employment, their terms and conditions and their pension rights as well. But that can only be done going forward, it can’t be done retrospectively.”

Deputy Canney is asking the government to enter into substantial talks with the union through the Labour Court, as there is a very real threat of strike action.

This will be followed by an indefinite strike commencing from Monday, November 16, with notice to be served to schools and the Department of Education this Thursday.

“School secretaries who are paid through the annual school grant have no pension rights, no holiday pay and they have to draw unemployment assistance during holidays,” Sean Canney said.