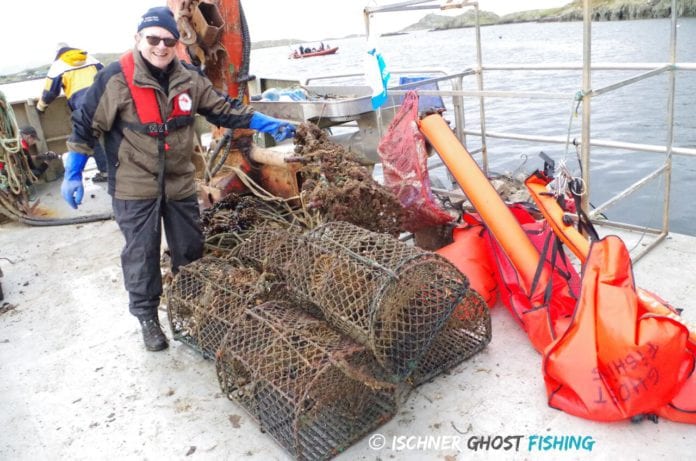 FIFTY-SEVEN lobster pots have been recovered from the bottom of Killary Harbour in Co. Galway, in a first-of-its-kind operation.

As well as the lobster pots, a number of crabs, conger eels and dogfish (a small shark species) were saved by divers who released them just in time.

The recovery took place last week and was carried out by a team of 6 expert technical divers in the Ghost Fishing Foundation, supported by Gesellschaft zur Rettung der Delphine (GRD) and Scubadive West.

The divers recovered the lobster pots, hundreds of meters of rope and several fishing nets from the bottom of the fjord in Conamara.

Lobster pots are accidentally lost when their surface marker buoys get severed during storms or collision with boat traffic, but unfortunately continue to fish when left unattended at the seabed.

The retrieved lobster pots were taken on board a mussel boat, and offloaded in the local fishing harbor Rosroe Pier, where they were returned to the fishermen to use them once more.

The locations of some of the pots were known to the team as their coordinates were recorded during a survey mission in May 2018, but most pots were found at previously undived locations and were alarmingly easy to find: the seabed is littered with them, and many more remain in situ to this day.

Ghost fishing gear is responsible for the needless suffering and death of millions of marine animals in the world’s oceans.

It is estimated that 640,000 tons of fishing nets are lost or abandoned at sea each year.

On September 5th , the Galway Aquarium hosted a presentation to introduce the Ghost Fishing Foundation and GRD to the Irish public while the next day, the divers joined a beach cleanup in Grattan, Salthill organised by the Aquarium and Clean Coasts.

Both side events were well attended and provided a good opportunity for the locals to learn about the work being done on an international level to protect marine life from ghost gear. Ghost Fishing aims to return to Ireland next year and intends to establish a permanent chapter in Ireland for which experienced technical divers are needed.