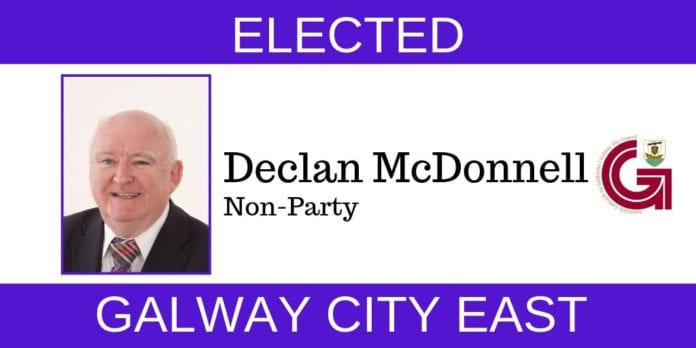 No surprise news as Declan McDonnell is the first person elected to Galway city council this evening in the city east district.

The Independent Councill exceeded the quota for Galway City East was deemed to have passed the quota in the first count by the city council at Westside Community Centre with 1,090 votes.

First time candidate Alan Cheevers, running for Fianna Fáil, is in second place with 961 votes after the first count, followed closely by Independent Terry O’Flaherty at 937.

With a quota for election in Galway City East of 1,059 votes both look likely to take seats as counting progresses to the second round.

The Returning Officer for the city has also deemed Pat Hardiman to be excluded with just 65 votes after the first count.

Sitting councillors Mike Crowe (FF) and Noel Larkin (Ind) are also both well positioned to return to their seats on the city council with 755 and 675 votes each respectively.

Sinn Féin and Fine Gael are both hoping to keep a councillor in this six seat district with Máiread Farrell (SF) in 56th place after the first count at 522 votes and John Walsh polling 7th with 456.

However Walsh’s position is far from secure as first time Social Democrats candidate Owen Hanley is not far behind home with 422 votes, followed by the Green Party’s Claire Hillery at 382.

Declan McDonnell’s 31 surplus votes and Pat Hardiman’s 65 will now be redistributed in the second count.