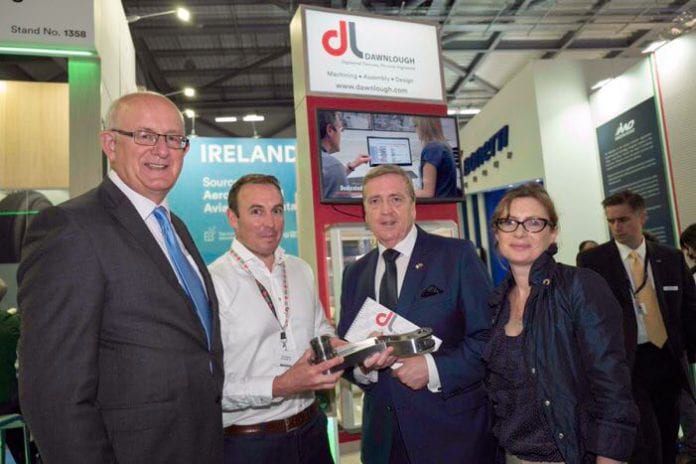 Over sixty new jobs have been announced for Galway City in the past week.

Fifty of the new jobs were announced by precision engineering company Dawnlough, as part of a €5million investment to support its existing and future contracts.

The new jobs will be created at its new 30,000 sq ft state of the art facility in Galway City which will open in September 2018.

This will complement its existing 20,000 sq ft facility.

At the event, Croom Precision also announced that it has been awarded with supply chain 21 status and subsequently the creation of 18 new jobs.

In achieving the accolade of AS9100 regulatory approval in September 2017, the company has experienced rapid growth following on several trade missions to companies such as Airbus, Rolls Royce, Saffran and the South Carolina Chamber.

Croom Precision has invested over €2.8million in manufacturing equipment to meet growing medical and aerospace demand.

Its research and development activities have won two advanced manufacturing awards in 3D metal printing where its team has been recognised on an international level.

There are over 250 companies active in the aviation and aerospace sector in Ireland, contributing over €4.1 billion to GDP and supporting 42,000 jobs in Ireland.

Supported by Enterprise Ireland, the Emerald Aero Group represents a cluster of 16 Irish aerospace companies who have joined forces to offer services and supplies in components of Precision Engineering, Metal Fabrications, Plastics and Composites.

Minister Pat Breen said: “Ireland is growing in strength in the aviation and aerospace sector each year. I’m delighted to see two Irish companies announce the creation of 68 jobs as well as the great news that the IASC aviation cluster in Shannon is joining the elite European Aerospace Cluster Partnership (EACP).

“Shannon IASC is not only the largest aerospace cluster in Ireland, but a cluster of pan-European significance. This combined news is a fantastic representation of how well the well the sector is performing and future potential.

“Farnborough International Air Show provides the Irish aviation and aerospace sector with an important platform to showcase Irish capabilities to buyers from all over the world as well as the opportunity to win business by developing new contacts in the region and identifying new opportunities.

“There was approximately $124 billion-worth of orders placed and commitments made at the last Farnborough event two years ago.

“I very much hope the Irish companies represented at the Enterprise Ireland Irish Pavilion can tap further into this market, deepening relationships with the likes of Airbus, Bombardier, Boeing, Rolls Royce, GKN Aerospace and related supply chains such as Rockwell Collins & Thompson Aero Seating.”

The Minister’s presence at the Air Show help sfoster trade links, in particular with the UK, which has high potential growth in the sector.

Tom Kelly, Divisional Manager, Industrial, Lifesciences and Consumer, Enterprise Ireland,  added: “Ireland has a long and proud history in the aviation sector, which is now coupled with significant growth in the Irish aerospace supply chain, both in terms of capability and performance.

“The Irish Pavilion will help to spot light Enterprise Ireland client companies, showcasing their capabilities and their commitment to the sector.”

“The strength and international reputation of the Irish aviation and aerospace is well established, and we are focused on supporting the sector to capitalise on the clear growth opportunities in the UK and worldwide.

“Globally, the world’s airlines will need 38,000 new planes by 2036 to cater for projected growth”

At the Farnborough International Air Show, Enterprise Ireland hosted a roundtable discussion with key Aerospace Industry Representatives in order to promote Ireland’s growing capability in aerospace and aviation, as well as develop relationships with the regional clusters so they are open to business from Irish client companies.