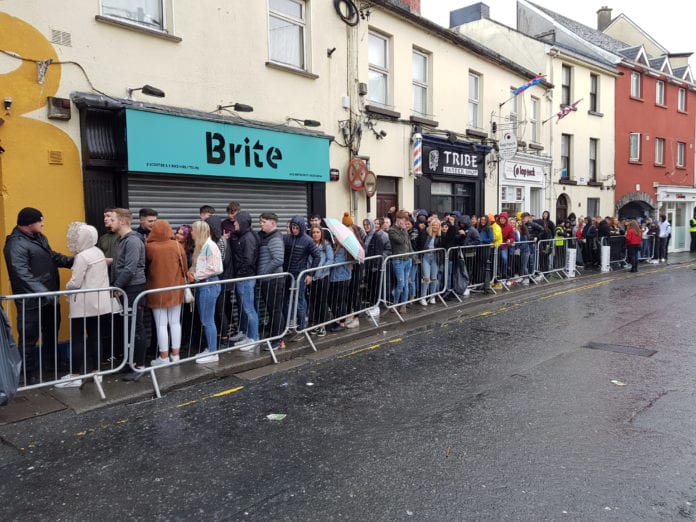 Donegal Tuesday, the ‘highlight’ of the unofficial Rag Week for students in the city, is back again with big crowds at the Hole in the Wall.

Students have turned out in massive numbers on Eyre Street today, as they do every year for Donegal Tuesday, filling the street with Donegal jerseys as they wait to get into the pub.

Extra security staff are out on the street to manage the crowds, which stretch down the street from the entrance to the Hole in the Wall and around the corner towards the junction with Eglinton Street.

The Hole in the Wall pub has long been the central feature of Donegal Tuesday for students, and this year it is under new management after closing in 2019.

Both NUIG and GMIT banned the official version of Rag Week in 2011 after previous years had seen escalating anti-social behaviour.

However it has continued as a tradition among students with the colleges involvement purely as a week of drinking throughout the city.

Last week an email was sent round to students at NUIG from the Dean of Students Professor Michelle Miller and President of the Students Union Clare Austick.

This highlighted the role of clubs, societies, and public events such as the health orientated SHAG week in social and community life at the university.

While this email did not specifically refer to Rag Week, it did say that “While acknowledging the many positive achievements, there are occasions when the University receives complaints about student behaviour.”

“You should be aware that all such complaints are followed up by the University, and in cases where our Student Code of Conduct has been breached, then sanctions or disciplinary procedures are put in place.”

Extra gardaí have been allocated to Galway City this week to help deal with any antisocial behaviour or extreme public drunkenness that occurs.