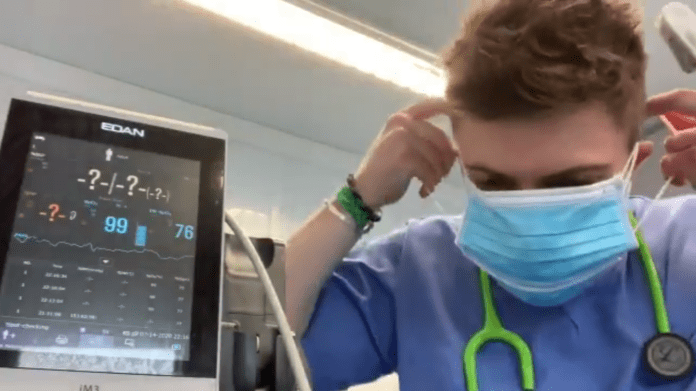 An Irish doctor has gone viral after posting a video on social media clearly disproving the ‘dangerous myth’ that face masks lower oxygen levels in those who wear them.

Dr Maitiú Ó Tuathail, who is Medical Director of Heroes-Aid, posted a video of himself to his Twitter page wearing six face masks while connected to a monitor which displayed his oxygen levels.

Even with six face coverings, there was no change in his oxygen levels, demonstrating that face masks have no effect on a wearer’s blood oxygen levels.

The footage of the Dublin-based GP has been carried by news outlets across the world from the United States to Australia, including The New York Post, Euro news and NowThis Politics.

The video has been viewed over 20 million times across their respective social media platforms and the original clip uploaded to Twitter has been seen over 647,000 times alone.

“Does wearing a face mask lower your oxygen levels” repeatedly by patients today!

Based on what they are reading on social media

I managed to get six face masks on + it had no effect on my oxygen levels! pic.twitter.com/qNKYa8pejx

Since masks began to appear in Ireland, conspiracy theorists have doubted their effectiveness, and questioned whether medical professionals and governments had hidden motives for advocating the coverings.

One of the most widely shared pieces of misinformation online has been that wearing thin layers of fabric over the nose and mouth affect oxygen levels.

Dr Maitiú Ó Tuathail said that he made the video to debunk this dangerous myth, and said that he is both ‘surprised and delighted’ that it has been seen by so many people.

“Face coverings are an essential weapon in the fight against Covid-19 and now more than ever, we need to embrace and accept face coverings,” said the Doctor.

“It is vital that people know the facts around face coverings and their importance in stopping the spread of Covid-19.

“At Heroes-Aid, we are striving to provide supports to frontline workers, including supplying them with PPE, as it remains the most important factor in ensuring the safety of frontline healthcare staff during the pandemic.”

Mary Leahy, CEO of Heroes-Aid, said that the work of Heroes-Aid has only begun, despite the organisation supplying those on the frontline with over 500,000 pieces of PPE to date.

“We are now moving towards providing psychological supports to those who have spent the last few months fighting Covid on the frontline.

“We want to support them in any way we can. If people want to learn more about us, or indeed donate, they can find out more on www.heroes-aid.com,” she said.

Since it was founded, Heroes-Aid has utilised over €260,000 in donations from members of the public to supply Ireland’s frontline workers with over 500,000 pieces of PPE.