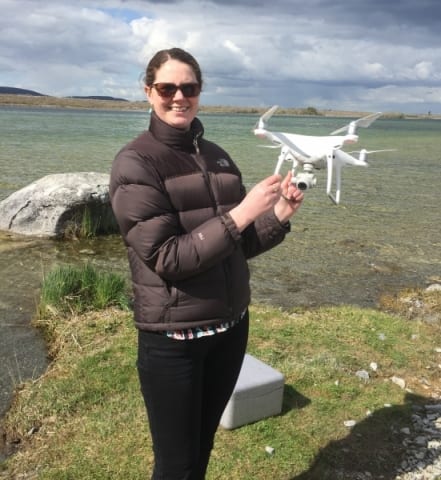 Researchers at GMIT’s Marine and Freshwater Research Centre have secured funding from the EPA to study whether drones could be used to help test water quality.

Doctors Heather Layy, Ian O’Conn, and Conor Graham want to know if drones could be used to test water quality on lakes by taking water samples and collecting chemical data.

The hope is that if they can, the Environmental Protections Agency would be able to monitor a far greater number of lakes with the resources they have.

Dr. Heather Lally said, “Application of drone technology in environmental monitoring has really taken off over the last few years. Here at GMIT’s Marine and Freshwater Research Centre, we are coupling this novel technology with a practical approach to solving water quality sampling issues.”

“We hope that the project will allow a great number of inaccessible lakes to be monitored, whilst offering quicker sampling times and overall greater value for money to the Irish taxpayer.”

The drones would lower a device into the water that would take water samples and gather physio-chemical date from the water.

They then transmit that data back along with live underwater camera footage to the flight operators.

The tests will be to determine how efficient the drones are whether the quality of the samples and data they gather match the standards set out in the EU Water Framework Directive.

The project has secured €132,000 in funding from the EPA for the next two years to assess the machines viability.

In order to create the specialised drones the GMIT team are working with Model Heli Services, a family owned business in Ennis.

Professor Olaf from Rutgers University in New York who uses drones to monitor rivers and lakes in North America and Mongolia is also being brought onboard.

We will try to overcome these issues of safely using drones. We look forward to designing and building the drone and payload system. Ireland is leading the way with drones and how they can be used in all sectors. this is another chance to show what can be done.”

The project has the potential to reduce sampling times, as well as the cost and personal requirements for taking the samples by boat, on top of being safer.

The project team is made up experts from many areas including water chemistry scientists, lake biologists, incorporated engineers, drone pilots, and field researchers.

Dr Conor Graham, one of the project leads, said that “Success of this innovative and collaborative project has the potential to develop Ireland as world leaders in lake water quality monitoring.”