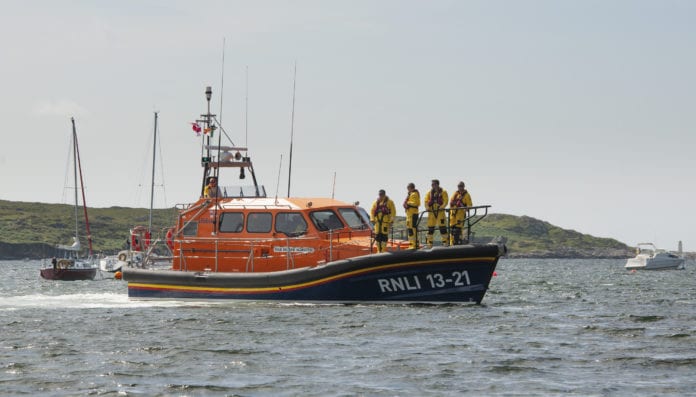 The Clifden RNLI Lifeboat was called out to a Mayday on Monday afternoon after a boat caught fire in the waters near Roundstone.

The lifeboat was called out shortly before 3pm yesterday after a call from the Coast Guard about a rigid inflatable boat which has caught fire in Bertraghboy Bay near Roundstone.

The three people who were aboard the RIB has managed to evacuate to an inflatable lifeboat, before being taken under tow by a local fishing vessel.

They had been diving approximately three miles off shore when the incident happened.

Coast Guard Rescue 115 helicopter was also launched in response to this incident, and remained on the scene while the Clifden all-weather lifeboat dealt with the situation.

The RNLI crew escorted the casualties into Inishnee pier, where they were met by members of Cleggan Coast Guard.

The Aran Islands RNLI crew had also received a request to launch in response to this incident, but were stood down once it was clear the situation was under control, as was Clifden’s Atlantic 85 class inshore lifeboat.

“While this was obviously a very upsetting thing to happen, the boat was very well equipped and the sailors had taken every safety precaution to deal with an emergency scenario like this,” said Clifden RNLI Coxswain James Mullen.

“We wish them well and commend their quick actions and also of course the local vessel that went to their aid as quickly as possible, in what have could otherwise have been a disastrous incident today.”