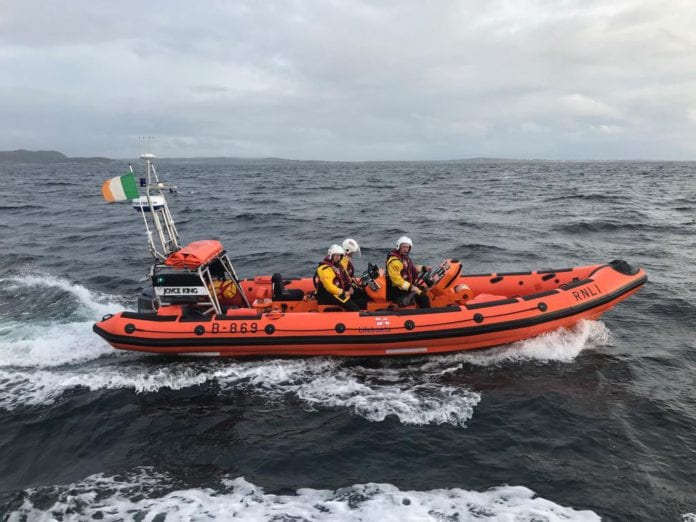 Volunteers from the Clifden RNLI lifeboat station rescued came to the assistance of two kayakers who found themselves in danger off the shore of Connemara on Tuesday.

The Lifeboat Station was responding to reports from the Coast Guard of a person in the water at Ballyconneely at around 4:30pm yesterday.

Two kayakers were at sea when one entered the water and got into difficulty when separated from her kayak, which had filled with water and capsized.

The alarm was raised by a vigilant member of the public from the shore who gave very detailed information of the location and scene.

Clifden’s Atlantic 85 helmed by Joe Acton was first on the scene and the crew found the two women standing and waving towards them from offshore rocks near the Connemara Golf Course.

The women and the remaining kayak were taken on board, quickly assessed and given blankets and then brought safely to shore where members of Cleggan Coastguard Unit took over their care.

The inshore D class lifeboat was also on the scene and launched from a nearby beach to recover the other kayak from the water, while the all weather lifeboat was en route at the time, but was stood down before arriving.

This was the third launch in a week by the Clifden lifeboat crew and the Station’s Operations Manager John Brittain said “The crew did very well today to get 3 boats on the water in a matter of minutes and thankfully we were on the scene very quickly.”

“This is an example of how situations at sea can change rapidly, and the vigilance of the public is so important, especially at busy times of year and in holiday destinations”.

The RNLI is a lifesaving charity that maintains hundreds of volunteer staffed lifeboat stations across Ireland and the UK, saving over 142,700 lives since being founded in 1824.