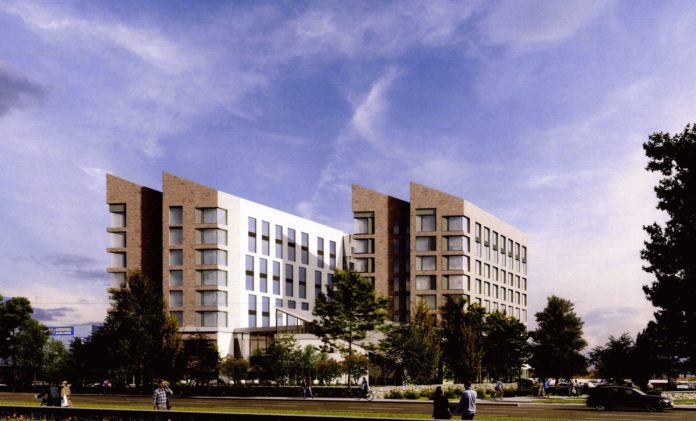 Planning permission has been granted for a large new hotel and spa on the outskirts of Galway City.

Parosi Developments Ltd has received approval from the city council for the hotel in Briarhill Business Park, after the plans were initially rejected in October of 2020.

The plans submitted to the council were for an eight storey building over basement, with a total of 186 guest bedrooms

However, in granting approval, the council has ordered that one floor, the equivalent of 29 bedrooms, should be removed.

The ground floor of the hotel will contain the reception area, lounge area, a restaurant, a bar, a lobby, toilet facilities, and back of house rooms.

The first floor of the building will be given over to the spa facilities including a swimming pool, a whirlpool, a sauna/steam room, male and female changing rooms, and storage rooms.

Other spa facilities will include a treatment room, a studio, a gym, a lobby area, a storage area, and eight meeting rooms.

The development will be served by 157 car parking spaces, 28 bicycle spaces, and three set-down spaces by the entrance.

Three new vehicle entrances to the site from the west and north are to be created, and the existing entrance to the business park campus will be enhanced.

There were seven objections to the plans received by the city council, which concerned the CI land use zoning, the scale and height of the building, traffic and car parking.

In total the city council attached 22 conditions to the grant of planning permission.

Among these, it was stipulated that the gym may only be used by guests, at least 10% of the parking spaces must be fitted with electric vehicle charging points.

Pedestrian links through the site must also be improved, and the developer is required to submit evidence of shuttle bus arrangements to transport guests.