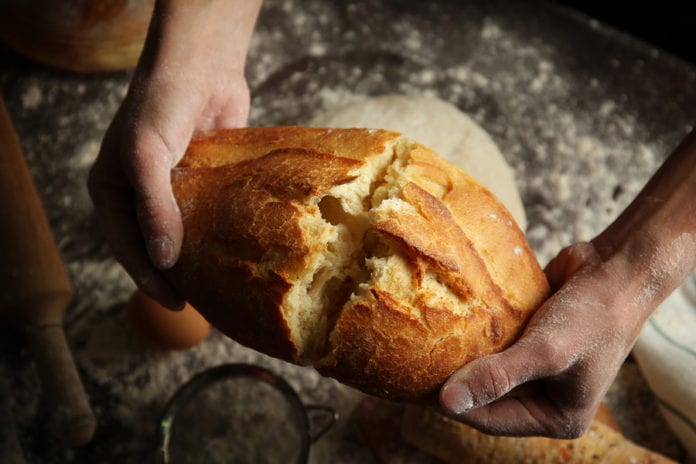 Another successful Galway Food Festival culminated this afternoon in the Breaking Bread community feast, held in a packed Printworks gallery on Market street.

The feast featured live performances and food stalls from various Galway-based community groups serving to both highlight the plethora of different cultures in the most diverse city in Ireland as well as raise funds for Cope Galway.

And it was crowded from the start. Traditional Polish songs rang out from the performance area as children raced around picnic tables and throngs of people chatted and ate beneath colourful bunting and balloons.

Tipperary native and ten-year Oranmore resident Eleanor Nolan, who attended Breaking Bread with her young son Ted, said: “I’m really enjoying it. It’s kind of a nice mishmash of absolutely every kind of food and fun that you could manage. There’s even food for him, which is great.

“We had a little bit of everything, really. I’m a coeliac, and the allergens and stuff are marked down, which is really handy…it was really really good.”

Longtime Moycullen resident Gloria Avalos – one of the founding members of the Mexican Community of Galway – commented: “I think it’s an amazing event, and it’s a great opportunity to taste the authentic food from the different cultures that are in Ireland, in this beautiful country.”

They served chicken enchiladas with coriander and cheese on top, charro beans – traditional ‘cowboy’ beans made with chorizo and bacon – and carlota lemon cake for dessert.

But when it came time for her lunch break, Avalos wanted to try something new.

Several local organisations – including the Galway Anti-Racism Network, the Galway Traveller Community, The Burren Lowlands, and The Melting Potluck – were also serving food alongside the community groups of various nationalities.

Although most of the food came from all across the globe, traditional Irish standbys like coddle were also available for the less adventurous palate.

Ballybane resident Gabriella Toko, who was serving food with the Galway Congolese Association, said: “I love the event. I was working at it last year, that’s how I came to know about Breaking Bread. I’d heard about the food festival before, but I never actually got to experience it as much until I got involved last year.

“It’s great. I love it, personally. I think it’s cool having a lot of different nationalities come together and share whatever they have to share.”

So what’s on the Congolese menu?

Toko said: “Today we have two different dishes. We have puff puff, which is a traditional donut that we make from our country. So just basic ingredients: flour, yeast, sugar, vanilla extract for a bit of flavour. And we have ntaba, which is a lamb dish – it’s grilled lamb with onion, garlic, seasoning, all of that good stuff.

“And we have a homemade chili sauce that we serve with it. So it’s Scotch bonnets – really really hot peppers – a bit of garlic, a bit of onion, a little bit of seasoning as well in that. And it’s usually fried up, so it’s really good.”

First-time attendee and five-year Galway resident Arthur Demurger commented: “I think it’s very good…you never realise that there’s so many different communities in Galway. It was the same for the St. Patrick’s parade.

“I’m a tour guide, so I always tell people that Galway is very international, but this is a good sign of that.”

Demurger tried the Congolese ntaba lamb dish as well as Moroccan tagine. The verdict? “I like it!”

Local events organiser Paul David Murphy – who worked at Breaking Bread – said: “Great numbers in here. It’s fantastic. Loads of flags all around the place, loads of costumes, loads of artwork, and most importantly, loads of food!”

“I actually for the first time tried some food from Ghana, and I had spinach and yams, and plantain…absolutely splendid. The flavours were unbelievable. I’m thinking about Filipino next.”

The Castlegar native added: “This is wonderful. Just to see so many cultures, so many people, but yet we’re all Galway. It’s great.”

Breaking Bread was organised by the Galway Food Festival and Galway 2020 in collaboration with Creative Ireland.